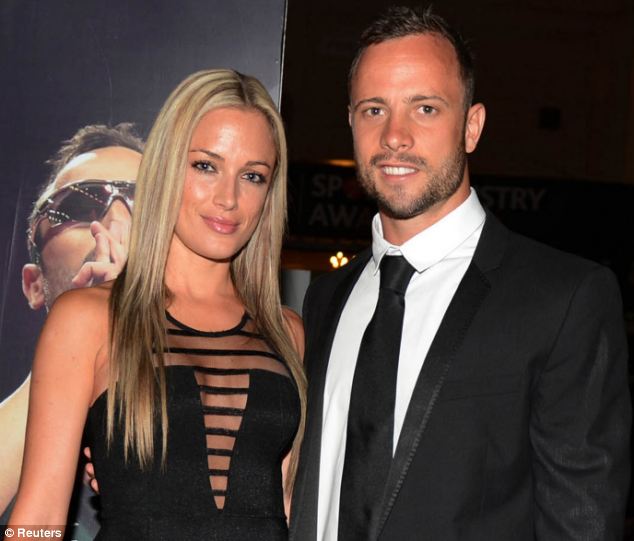 Police are investigating if Oscar Pistorius may have shot dead his girlfriend in a fit of so-called ‘steroid rage’ – an explosion of aggression caused by performance-boosting steroids.

Officers who searched the 26-year-old’s home after Reeva Steenkamp was killed are reported to have found steroids.
Miss Steenkamp, 29, was shot four times early on Thursday at Pistorius’s luxury home in a secure housing estate on the outskirts of Pretoria.
Police have rubbished speculation that Pistorius – who is known to have kept a pistol by his bed and a machine gun at his bedroom window – may have mistaken his girlfriend of three months for an intruder.
As he awaits the result of his bail application tomorrow, it was reported this morning that Pistorius accidentally discharged a gun in a busy Johannesburg restaurant – and nearly hit his friend’s foot.

Model Reeva was killed by 9mm pistol shots fired through the locked bathroom door at around 3am on Valentine’s Day.
She was hit in the head and body four times in total. But police now believe the first shot was fired at her in the master bedroom — hitting her hip as she fled to the bathroom.
Wounds to the top of her head suggest that as she sat doubled up in pain on the toilet she was hit three more times by bullets that ripped through the door.
Experts say she may have been covering her head protectively with her hands, which explains the bullet wounds to her finger and arm.

Police arrived at the mansion — which has five reception rooms, a Roman-themed roof pool and three garages — and followed a trail of Reeva’s blood inside.
They found her overnight bag and an iPad on the bedroom floor. The holster for Pistorius’s Taurus pistol was at the side of the bed.
The bedclothes were crumpled, suggesting it had been slept in. A bullet cartridge was found in the bedroom — leading to the theory that the initial shot was fired there.
Police also have CCTV showing Reeva arriving at the house on the Silver Woods estate at 6pm.
Neighbours told of hearing shouts and screams on Wednesday and early on Thursday.

A blood-stained cricket bat was found at the home in Pretoria, South Africa — and Reeva, 29, appeared to have skull “crush injuries”. Tests will establish whether she was injured by the bat before being shot.
Police will also examine the theory she used the bat to defend herself or that Pistorius used it to smash his way into the bathroom.

Inside the house of horror … Oscar Pistorius’s bathroom