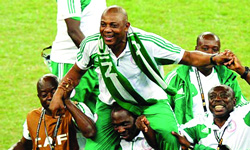 Until he helped Nigeria win the Africa Cup of Nations in South Africa on Sunday, Stephen Keshi’s achievements for his country in his heyday could hardly be said to have received the deserved recognition.

The 51-year-old blazed a trail in the signing of Nigerians as professional players in Europe when, after  stints with Ivorian clubs Stade d’Abidjan (1985) and Africa Sport (1986), he joined Belgian  side Lokeren in 1987.

Perhaps, Keshi  could have ended his playing career in the domestic league like Nigerian football greats such as   Segun Odegbami, Kadiri Ikhana, Christian Chukwu, Aloysius Atuegbu, Emmanuel Okala, Sunday Eboigbe, Bright Omokaro  and Best Ogedegbe if he had not been suspended by the Tony Ikhazoboh-headed Nigeria Football Association in 1985.

He was suspended indefinitely alongside Henry Nwosu, Clement Temile, Sunday Eboigbe and Bright Omokaro for reporting late to the Eagles camp in Lagos.

It meant the Benin-based players could not feature for their clubs and  their careers were in tatters.

Before their suspension, Keshi had captained  New Nigeria Bank, with Nwosu, Eboigbe and Omokaro playing prominent roles, to win the then elusive WAFU Cup back-to-back in 1983 and 1984.

At the national team level, he had represented Nigeria  at the Libya’82  Africa Cup of Nations (his first) and won silver with the Eagles at the 1984 finals in Ivory Coast.

Before he broke into the senior team, Keshi was one of the foundation members of the Junior Eagles (now Flying Eagles). He later coached the team during the U-2o Africa Youth Championship in Ethopia in 2001.

Keshi’s move from Lokeren to Anderlecht in 1987, a club he helped win the  Belgian Cup  twice ( 1988, 1989) and  the league title in  1991, undoubtedly shot him into the spotlight. With rave reviews in the media and hefty weekly wages for his efforts, Keshi  transformed from the player  who would  endure mosquito bites and a dog’s  breakfast at  any makeshift or rundown hotel called Green Eagles camp.

With Keshi elevated to an elite status, the reports of the good life for footballers  in Belgium triggered an exodus of star players from the domestic league to the European country.

They were later followed by the likes of  Daniel Amokachi, Victor Ikpeba and Tijani Babangida.

Keshi’s decision to seek greener pastures in Europe impacted on the domestic league as much as it did on the national team.

He was not blind to the organisation of the game in Europe and began to   insist on the standards there in his country.

As the captain of the national team, Keshi, who is popularly called the Big Boss,   led a crusade against official cheating, a lack of respect for players and unpaid air tickets.

This often got him into trouble as sports authorities, who were allegedly making bigcash from matches or competitions at the players’ expense, were not always happy with him. He was labelled  “a stubborn” player by the authorities. Some officials claimed that he was “greedy” while others said he was “arrogant” and a “rebel”.

Despite all the criticism, Keshi commanded the respect of his national team colleagues.  In every game, he showed grit, determination and a winning mentality.  Off the field, he also helped in curing some of the home-based players in the national team of an inferiority complex that made some of them to ‘waste’ their talents at home when they could earn dollars in Europe.

His former New Nigeria Bank  and Eagles teammate Henry Nwosu insists  the former Togo manager does not represent the above.

“Keshi is not a stubborn person,” Nwosu told our correspondent on the telephone during the week.

“It depends on what they mean by Keshi being stubborn. If sticking to one’s belief and fighting for one’s right  is what makes one a stubborn person, so be it.

“I’m not aware  that he was being rude to officials when he played for the national team. We were always together and no official of the NFA accused him of insurbodination.

“Probably, those who see him as a stubborn person don’t understand him.”

After helping Nigeria win the Africa Cup of Nations for the second time in Tunisia in 1994, and qualifying for the country’s ever World Cup in the United States, the powers that be vowed to stop him from reaping the fruits of his   labour  (playing at the USA’94 World Cup finals). He was accused of “insubordination” before the continental finals.

But coach Clemens Westerhof kept faith with his captain and included him in the World Cup squad, in spite of the pressures from ‘above’ and  from some sections of the press.

Certainly, fate had a hand in Keshi’s appointment as Eagles coach. Reports claimed that he came first in the previous interview he attended, but the Nigeria Football Federation selected Siasia for the job.

Reports claimed that some members of the NFF worked against his choice because of his ‘controversial reputation’.  He got the job later after Siasia was sacked after the Eagles failed to qualify for the 2012 Africa Cup of Nations co-hosted by Gabon and Equatorial Guinea.

Keshi became an  instant hero the day Nigeria defeated the star-studded Elephants of Ivory Coast  in the quarterfinals of the South Africa 2013 Africa Cup of Nations. Winning the trophy and making history as the second man to win the tournament as a player and coach behind Egypt’s Mahmoud El Gohary, who won the title in 1959 as a player and in 1998 as a coach, is just the icing on the cake.

He is the first black African coach to win the championship in 21 years. Ivorian Yeo Martial had kept the record since 1992 when he led Ivory Coast to lift the trophy at Senegal’92 finals.

Former Mali coach Keshi had his sights set on winning a trophy for Nigeria as far back as 2006. He was sent packing along with his boss  Shaibu Amodu after they led the country to qualify for the Korea/Japan 2002 World Cup and a third-place finish at the Mali 2002 Africa Cup of Nations.

Keshi  was appointed by the Togolese FA to coach the Hawks in 2004 and he promptly gave the small West African country a ticket  to their first World Cup tournament at  Germany 2006.

“Some day, I will be coach of Nigeria and then they will know they have a coach,” Keshi told www.guardian.co.uk in 2006.

True to his prediction, he has succeeded by winning the 29th edition of the Nations Cup to end Nigeria’s 19-year wait in football wilderness.

Keshi  went to a  market where angels fear to tread  for materials  for a major championship like the Nations Cup.

He did what no foreign coach has done for a long time by excluding established  Europe-based professionals such as Osaze Odemwingie,  Taye Taiwo, Obafemi Martins, Yusuf Ayila and Kalu Uche in favour of  the likes of Kenneth Omeruo, Godfrey Oboabona, Ogenyi Onazi and Sunday Mba.

And some of these players are already attracting the big clubs in Europe and the sky seems to be their limit.

The former Malaysia-based defender sparked panic in the  country after he  announced his decision to stand down on Monday, less than 24 hours after guiding Nigeria to their third continental crown with a 1-0 win over Burkina Faso.

“I did what I feel is right by resigning,” Keshi told South Africa-based Metro FM.

A few days before the final,  Keshi  told Goal that he would “pack his bags and leave” if he felt he was not wanted.

Although the NFF has since denied having any problem with the historic coach, and he himself reversing his resignation after  the government stepped him,  Keshi remains