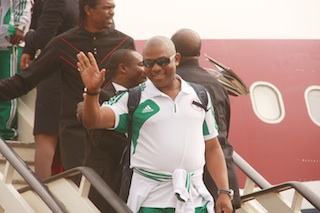 The Senate on Tuesday in Abuja passed a vote of confidence on Super Eagles Head Coach, Stephen Keshi, the team’s technical team and Nigerian coaches. The Senators gave the Super Eagles a standing ovation and congratulated them for making the country proud by winning the Africa Cup of Nations (AFCON).

The resolution was sequel to a motion on the country’s glorious outing at the 2013 Africa Cup of Nations (AFCON) moved by the Deputy Senate President, Sen. Ike Ekweremadu. The motion was unanimously supported by the senators, who spoke glowingly about the spectacular performance of the Super Eagles on their way to emerging as Africa champions.

Senate President David Mark, who lead a team of VIP cheer leaders to the finals in South Africa, said the exploit of indigenous sports talents must be appreciated and encouraged in order for the country to achieve more excellence. Mark said the achievement of the current crop of Super Eagles’ players was enough for “our sports administrators to believe in our indigenous coaches and players.

Mark said Keshi’s purported resignation was due to his opposition to plan by the Sports Ministry to hire a foreigner to head the Super Eagles’ technical crew. He described the interference by sports administrators in the running of the national teams as “unhealthy and counter-productive” to the achievement of good results in international sports. The Senate President urged the senators to prevail on Keshi not to resign his appointment at a time when the country needed his services most to nurture the array of talents under him.

“Stephen Keshi confirmed to me this morning that he has resigned due to interference by administrators and plans to hire a foreign technical adviser.”

The reason  for that was too much interference and that even before the final match on Sunday, a lot of pressure was mounted on him to accept a foreign technical adviser.

“Keshi said he was opposed to the plan, because there were Nigerians, who could work with him, and that he did not see the gain in bringing foreigners.”

He also decribed the over dependence on government for funding of sports, saying that it was inimical to the growth and progress of the sector. “The procedure for getting fund out is not easy. It’s not straight forward. If government gives you fund, there will be middlemen, who will administer it,” the Senate president said.

The Senate urged the Federal Government to reward the team and their handlers by conferring befitting national honours on them and naming streets after them in their states of origin. It also urged Keshi not to resign his appointment as head coach of the Super Eagles.