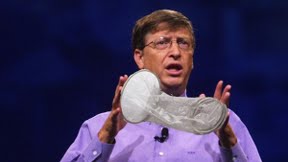 If you have a great idea on how to improve on the condoms we have now, Bill and Melinda Gates are ready to offer you $1 million.

Philanthropist and Microsoft founder Bill Gates, and his wife Melinda, are going to offer start-up funds of $100,000 to anyone who can come up with the “next-generation condom,” according to Grand Challenges in Global Health.

The Round 11 of Grand Challenges Explorations initiative has been managed through the Bill and Melinda Gates Foundation and is aimed at improving the lives of the world’s poorest people. There is no doubt that a new, innovative condom could do just that and help increase health awareness around the globe and hence reduce the spread of HIV/AIDS, but the condom must be effective at doing the stuff our current generation condoms can do.

If chosen by the Foundation, the lucky brain trust would find his/her project funded up to the grand total of $1 million.

“Inspiration can come from anywhere, and we are hopeful that this new round of Grand Challenges Explorations will uncover innovative approaches to improve lives around the world.”