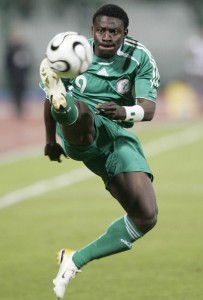 Obafemi Martins has completed his move to Major League Soccer side, Seattle Sounders for an undisclosed fee.

Earlier reports out of Spain revealed Martins’ La Liga side Levante, would receive $3.9 million ($3 million euros) to release the Nigerian forward from his contract on Monday.

According to Yahoo Sports, the move to make Martins a free agent is expected to pave the way for him to complete his long-rumored move to Seattle as a Designated Player.
Valencia-based journalist Carlos Ayats Pérez reported Monday morning that Martins would pay the sum himself.

Martins has scored seven times this season for Levante.

The Nigerian striker who had just been called back into the Super Eagles’ fold tweeted; “Wow…Finally, I can now announce that I have just signed for Sounders FC, A big step to take in my career. It’s a big challenge but I’m ready.