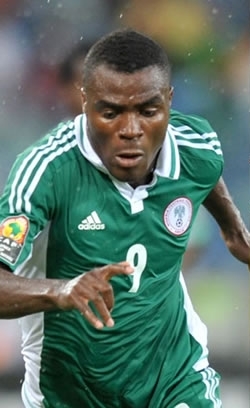 Highest goal scorer at the 2013 AFCON in South Africa and Nigerian striker, Emmanuel Emenike, has made a swift return to action after suffering a hamstring injury at the recently concluded tournament that saw him miss the finals.

It would be recalled that the power playing forward picked up a knock in the Super Eagles’ 4-1 semifinal drubbing of Mali on February 6 and was expected to be out of action for two months.

However, it now appears that he has recovered quicker than anticipated and is now set to make a return to competitive action for his club – Spartak Moscow. This will also be good news for Nigeria’s national team handlers as the Super Eagles prepare to face Harambee Stars of Kenya on March 23 in a 2014 FIFA World Cup qualifier.

Emenike announced the cheery news on his Facebook page:

“Am (I am) fine and back playing now. Thank you for all your prayers and wishes,” he wrote.