Michael Jordan got married over the weekend, with Tiger Woods, Spike Lee and Patrick Ewing among those attending the NBA Hall of Famer’s wedding in Palm Beach, Fla. 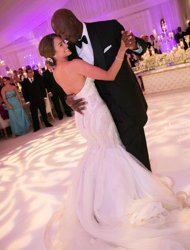 Nearly 300 guests were present as they exchanged vows. The reception took place at a private golf club in Jupiter designed by Jack Nicklaus. Jordan owns a home near the course.

The six-time NBA champion and Prieto met five years ago and were engaged last December.

Jordan had three children with former wife Juanita Vanoy. The couple’s divorce was finalized in December 2006.