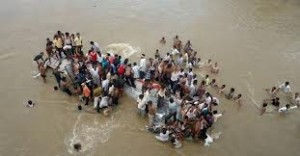 A crowded bus skidded off the road and plunged into a fast-flowing river in northern India on Wednesday, killing at least 33, according to police.

“So far, 33 bodies have been retrieved from the river and 14 other people are injured and have been rushed to hospital,” local police chief R.S. Negi told AFP from the crash site in Hamachal Pradesh state.

Negi said the death toll was likely to rise as some victims appeared to have been washed away in the fast-flowing waters of the Beas river which courses through the mountainous Indian state. Local reports said the bus was completely submerged in the water.

The officer said it was not immediately clear how many people were on board the bus, which was on its way to a village from Kullu when it slid off the road.

Wednesday’s crash is the worst reported road accident in India since March, when 37 people were reported dead after a passenger bus plunged off a bridge spanning a river in the western Indian state of Maharashtra.