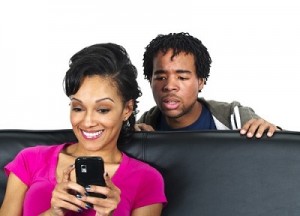 Cheating in relationships and even marriages is a very common thing and happens every now and then and as a man how do you dictate the change of pace in your relationship to know if your GIRL is unfaithful?

Well the signs may vary but there are certain facts that remains a key to dictate foul play but that’s if you’re paying attention to situations and not just LYING flat on the bed called TRUST.

HERE ARE THE POINTERS:

1: She tells more than usual how her day went

When a woman has skeleton tied around her daily activities, she usually comes up with much stories to cover the GAPS in between. A smart man should start from day one to monitor this area in other to know when the stories starts getting too LONG.

There is no other reason as to why a woman will be with her boyfriend or husband and then password her phone… if not that she is covering her tracks. If you have nothing to hide, you wouldn’t put yourself in that position to keep entering password just to check your MISS CALLS or TEXTS.

3: Always call to check the man’s location before leaving hers

When you’re building up games in relationship this aspect becomes common because you do not want to bump into your man surprisingly. It’s good for a woman to check on her man but not always conscious of that especially at the times before she leave her own location.

4: She Pays more attention to what she’s wearing than yours when outing When a woman begins to dress for other men to notice and not her man, then that’s a clear sign something is fishing or will soon be. A woman who doesn’t pay attention to how her man looks when going out with him has high hopes elsewhere and that makes her man’s outfit less important to notice.

5: She feels uncomfortable when you grab her purse or phone

The minute a woman starts to feel unease when you grab her phone or handbag either by twinkling her hair, looking at various positions in seconds, trying to distract you with unusual topic while reaching for what’s on your hands, then be sure that she covering tracks of something you need to know about. A woman who has nothing to hide will be delighted and happy you grabbed her stuff at least to prove to you she is clean.

6: She start getting upsets at little things

When things that usually doesn’t cause problems begins to lead to daily fights, it’s a sure sign the woman is about to sign-out from the relationship. She’s beginning to get fed up about something which seems like the “man himself”. Women usually don’t break relationships up or make it a living hell when they have not got an alternative by the side. So prompting the unusual fights are just excuses to pop the bottle. She is seeing someone else and that’s possibly why.