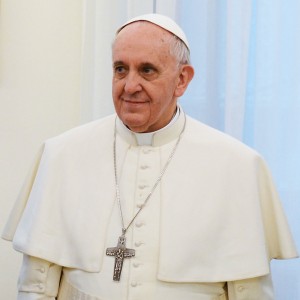 Pope Francis on Wednesday condemned the conditions of workers who died in the Bangladesh factory collapse as “slave labour,” saying unjust salaries and the unbridled quest for profits were “against God.”

His words were his toughest yet on workers’ rights since his election on March 13, and another indication that the former archbishop of Buenos Aires was intent on making social justice a major plank of his pontificate.

“Living on 38 euros (about N8,000) a month – that was the pay of these people who died. That is called slave labour,” Francis said in a private impromptu sermon at his personal morning Mass in his residence, Vatican Radio reported.

The death toll from the collapse last week of the illegally built Rana Plaza in Dhaka’s commercial suburb of Savar rose to 411 on Wednesday and about 40 unidentified victims were buried.

The pope, speaking on May Day, the international labour day, said: “Not paying a just wage, not giving work, only because one is looking at the bottom line, at the budget of the company, seeking only profit – that is against God”.

His holiness said there were many people in the world living in conditions of slave labour.

“Today in the world there is this slavery that is perpetrated with the most beautiful thing that God has given man: the capacity to create, to work, to make his own dignity,” he said.

“How many brothers and sisters in the world are in this situation because of these economic, social and political policies?”

Pope Francis has had clashes with the government of his native Argentina in the past on economic policy, as he always stick up for the poor, the downtrodden and the unemployed.

“Dignity is not bestowed by power, by money, by culture — no! Dignity is bestowed by work. Social, political and economic systems have made a choice that signifies exploiting the individual,” he said.

Later, at his public general audience in St. Peter’s Square, the pope returned to the subject of workers’ rights.

“Work is fundamental to the dignity of a person. I think of how many, and not just young people, are unemployed, many times due to a purely economic conception of society, which seeks selfish profit, beyond the parameters of social justice,” he said before tens of thousands of people.

In that address, he called on governments to tackle high unemployment and eliminate slave labour associated with human trafficking.

The International Labour Organization (ILO) estimates almost 21 million people worldwide are victims of slavery or forced labour. Almost half are thought to be trafficked, either across borders or within their own countries.

In Italy and elsewhere in Western Europe, many young women from Africa and Eastern Europe are victims of human trafficking and forced to work as prostitutes in major cities.