Myanmar’s Immigration Minister has expressed support for a controversial two-child limit on a Muslim minority group that opposition leader Aung San Suu Kyi and the United Nations call discriminatory and a violation of human rights. 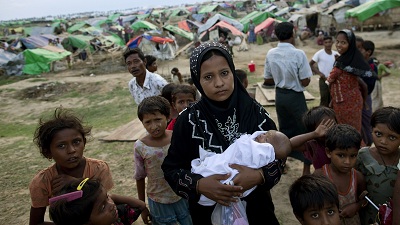 Khin Yi, Minister of Immigration and Population, is the most senior official to publicly support the recently announced enforcement by local authorities of a two-child policy in northwestern Rakhine State for Rohingya Muslims, a stateless minority termed “Bengalis” by the Myanmar government.

“This will benefit the Bengali women,” Khin Yi said in an interview with Reuters.

His comments coincide with mounting international concern over the treatment of minority Muslims in the majority Buddhist country following outbreaks of communal violence that have killed hundreds of people since last year and made more than 140,000, mostly Muslims, homeless.

Continued religious tensions pose among the biggest challenges for the reformist government that replaced a military junta in March 2011.

Authorities in Rakhine State say they need to impose controls on Rohingya to prevent further unrest. In Sittwe, the Rakhine State capital, apartheid-like policies have segregated Buddhists from Muslims, many of whom live in prison-like ghettos, since sectarian violence in June last year.

A spokesman for the Rakhine State government last month reaffirmed a 2005 two-child regulation in two townships, Buthidaung and Maungdaw, part of a web of restrictions drawn up by the former military government to control a fast-growing Rohingya population.

“The Bengali women living in the Rakhine State have a lot of children. In some areas, one family has 10 or 12 children,” said Khin Yi. “It’s not good for child nutrition. It’s not very easy for schooling. It is not very easy to take care of the children.”

Asked whether he supported the policy, he replied: “Yes.”

“Not in line with human rights”

The policy has drawn worldwide condemnation and stoked a growing debate over treatment of Rohingya, who claim a centuries-old lineage in Rakhine State.

The United Nations has called on Myanmar to “to remove such policies or practices”. New York-based Human Rights Watch said the law was “violating international human rights protections and endangering women’s physical and mental health”.

Nobel Peace Prize winner Suu Kyi has called the policy “discrimination” that is “not in line with human rights”.

The government says the Rohingya are Muslim migrants from Bangladesh who arrived during British colonial rule between 1824 and 1948.

The term “Bengali” suggests they are illegal immigrants from northern neighbor Bangladesh.

A 1982 Citizenship Act excluded Rohingya from Myanmar’s 135 recognized ethnic groups, effectively rendering them stateless. Bangladesh also disowns them and has refused to grant them refugee status since 1992.

He said the policy would help reduce problems caused by large impoverished families.

“Almost all of the Bengali women are very poor, uneducated. It is not easy to take care of the children. The two-child policy or three-child policy is enough for these people. That is my point of view,” he said.

To avoid paying fines or being arrested, some pregnant Rohingya have resorted to illegal abortions, say health workers.

“We see women coming into our clinics with infections and medical complications because they have had unsafe abortions,” said Vickie Hawkins, deputy head of mission in Myanmar at international medical charity Doctors Without Borders, which has been operating in Rakhine State since 1994.

“We have concluded over the years that women are having unsafe abortions because of the restrictive policies.”

Hawkins said the two-child limit was “a public reinforcement of policies that have already been in place for decades”.

Doctors Without Borders runs clinics in Maungdaw and Buthidaung townships, home to Rakhine State’s largest Rohingya populations. The government does not allow foreign journalists to visit either area.

Human Rights Watch said some Rohingya women pay bribes to evade the regulations and register their children with other legally married adults.

Others keep their children hidden or unregistered to avoid fines or jail, it said. When authorities learn of families with more than two children, the children are sometimes placed on a government blacklist, making them vulnerable to arbitrary arrest.

The two-child policy threatens to fuel wider anti-Muslim sentiment at a time of high communal tension across Myanmar.

In early June, hundreds of Rakhines marched in support of the policy through the Rakhine capital Sittwe and the towns of Mrauk U and Minbya, reported the Yangon-based publication The Voice Weekly.

Led by Buddhist monks, the rallies carried echoes of nationwide protests against the Organisation of Islamic Conference that preceded last October’s violence.