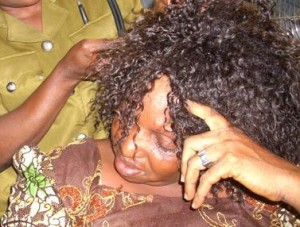 Enquiries from the dermatologist showed that she had contracted fungal infection of the scalp from the human hair she had worn.

A number of infectious agents and infection-related conditions can contribute to hair loss. Fungal infection can occur anywhere on the body. If it develops on the scalp, it can cause patches of hair loss and is known to doctors as “tinea capitis.”

Ringworm is the same thing as athlete’s foot, and the same kind of fungal infection can affect the nails.

On the scalp, ringworm usually begins as a small pimple that progressively expands in size, leaving scaly patches of temporary baldness.

The fungus gets into the hair fibres in the affected area and these hairs become brittle and break off easily, leaving a bald patch of skin.

Affected areas are often itchy, red, and inflamed with scaly patches that may blister and ooze.

The patches are usually redder around the outside, with a more normal skin tone in the centre.

The main difference between scalp fungus and fungus elsewhere on the body is that scalp fungus can be trickier to treat.

Her advice
She will not advise people to go for ‘human hair’ as what happened to her could have happened to anybody.

Recounting another friend’s story she said after having migraines for days from wearing a human hair, the friend went for a head scan where it was discovered that the weave-on had maggots in it.

To her, the treatment of ‘human hairs’ needed to be revisited by manufacturers saying that with her bitter experience, she would advise people who want to change their looks by wearing weave-ons, to go for the synthetic ones.

She has now braided her hair to cover her hairline as all the hair on her frontline is gone.