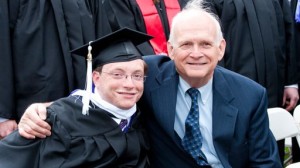 Collin Smith, 22, and Ernest Greene, 72, may be an unlikely pair, but they are considered a “packaged deal” on the campus of North Carolina’s High Point University.

Smith and Greene’s bond was forged in tragedy when, just before Smith’s freshman year of high school, he was involved in a horrific car accident. Smith, a three-sport athlete, was paralyzed from the chest down.

“A physical therapist came in and was like, ‘Hey, you’re not going to walk again,’ so it was kind of a shock,” he said. “Basically, your life has been stopped and you have to figure out and pick up the pieces.”

Greene, who’d recently retired as an engineer, heard about the accident through his church and felt what he described as “a calling” to help the teenager, whom he’d never met, though they attended the same church.

He called Smith’s family and offered his services to the boy’s overwhelmed, working parents.

“We always have a lot of fun,” Smith said. “Without him, I wouldn’t have gotten where I needed to be or wherever I’ll go. It takes a lot to get somebody to be mobile and believe they can do things.”

Through four years of high school, Greene acted as a nurse and driver for Smith. And when Smith entered college, Greene started putting in 12-hour days, leaving his home before dawn to get to Smith’s house by 6 a.m. He’d get Smith out of bed and ready for school and then make the 45-minute drive to campus. He attended every class with Smith and took notes for him while pushing him three miles a day or more.

Greene said he felt a bit sorry for Smith but, “I’ve also felt that he could do what he wanted to do.”

Against staggering odds, Smith recently graduated from college and, of course, it was Greene who pushed him across the stage.

“I’d been pushing him around campus for four years,” Greene said. “I wanted to push him up to get his diploma.”

The surprise came when Greene was given his own honorary diploma.

Smith said he couldn’t really explain the love he and Greene had for each other.

“Father, son is about the only that comes to [mind],” he said. “Once again, how do you describe Ernest? You just can’t. You just can’t describe what we mean to each other.