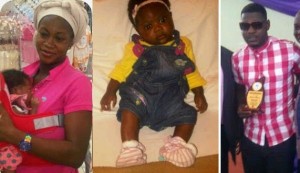 This whole thing started last year when Bukola Ajayi who was a business woman until she ventured into movie productions met Oreoluwa Jokotade, an actor who is popularly known as BigVal.

They started dating along the line, but things got messy after they had a big fight with the actor, BigVal sending BB Broadcasts to his friends, faamily and colleagues saying Bukola was threatening to kill me and incase anything happens to him she should be held responsible and even went on to say she duped him & his sister a sum of 500,000.

Bukola who denied the allegations said she was the one taking care & feeding him also changed his wardrode.

She said he impregnated her and collected her N2million.

According to Bukky’s friends, she gave birth on the 31st of May 2013, and the baby girl, who has been named Ayomikun is a carbon copy of the actor.

They also said the actor has been telling anyone who cared to listen that he has no daughter anywhere. But her friends are challenging him to come forward for a DNA test.

They also said they want him to start playing his role has a father in the little girl’s life.