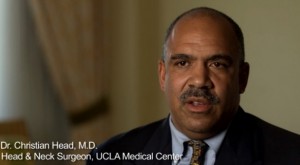 Christian Head, a former surgeon at UCLA’s medical school, will receive $4.5 million after settling a racial discrimination lawsuit against the University of California Board of Regents, the Los Angeles Times reports.

When Head, 51, filed the lawsuit in April, he accused the university of failing to prevent discrimination, harassment and retaliation against him after he used traditional channels to complain about racism he felt he experienced from his colleagues. The regents settled the lawsuit in a closed session Thursday.

Head alleged that he was routinely humiliated in public. During a meeting in 2006 with faculty, staff and graduating medical school residents, a slide show created by the residents — and typically reviewed by staff — was presented. In that presentation was a photo in which Head’s face was superimposed on a gorilla that was being sodomized by a department chairman, according to the lawsuit.

“The case presented difficult issues of alleged discrimination and retaliation that were strongly contested,” the university said in a statement. “…The matter was settled to the mutual satisfaction of the parties.”

Here is more from The Times:

Without admitting fault or liability, the university acknowledged that “an inappropriate slide was shown” and regrets the incident, the statement said.

Dr. Gerald Berke, chairman of the David Geffen School of Medicine‘s Department of Head and Neck Surgery, and Dr. Marilene Wang were named in the lawsuit and were accused of making “inappropriate racial comments and insinuations about blacks” and Head for years, the court document stated. Both are UCLA physicians and professors.

Neither Berke nor Wang could be reached for comment.

The settlement will be paid through a state general liability fund.

Head received his medical degree from Ohio State University in 1993. He  joined UCLA’s medical school in 1993. He has resigned from his position. The Times was not able to reach Head for comment on the settlement.