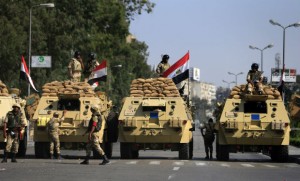 Sixteen Islamist activists have been shot dead during a protest outside a key Cairo army headquarters calling for ousted president Mohamed Morsi to be reinstated, the Muslim Brotherhood says.

“Sixteen people were killed and 100 others injured, many of them in serious condition,” the group’s spokesman Ahmed Aref told AFP.

Police barricades prevented journalists from accessing the area around the elite Republican Guards base.

Demonstrators told AFP that troops and police had fired tear gas canisters and bullets into the air to disperse the protesters.

“They wanted to disperse the protesters,” who were determined to stage an indefinite sit-in, the protester said.

Another protester, Mahmud al-Shilli confirmed that security forces fired into the air, adding that a group of men in civilian clothing had attacked the protesters.

“The Republican Guard fired tear gas, but the thugs came from the side. We were the target,” Shilli told AFP.

Earlier, demonstrators told AFP by telephone that troops and police had fired tear gas canisters and live rounds in a bid to disperse them.

“I saw with my own eyes the people who they shot at,” one protester said, adding that several people had been injured.

Speaking to Al Jazeera, Gehad Haddad, a spokesman for Muslim Brotherhood, said that at around 3.30 in the morning, army and police forces started firing at sit-in protesters in front of the Republican Guard headquarters in Cairo.

“We have people hit in the head, we have bullets that exploded as they entered the body, cluttering organs and body parts” he said.

“Every police force in the world understands how to disperse a sit-in. This is just a criminal activity targeting protesters.”

But the military said a “terrorist group” had tried to storm the Republican Guard facility, where Morsi is reportedly being held. It also said that an officer had been killed.

Brotherhood’s Haddad said there were two things “the bloodbath” was trying to do.

“First is that we leave streets and forego the objective of bringing democracy in Egypt after 60 sixty years of military tyranny or they think that our blood is cheaper than any other’s blood in Egypt and no one would care,” he said.

“We are sticking to our ground, we will not be brought into a cycle of violence, we know how deadly that would be. Even if that means we will have to become the punching bag of the rest of society and our blood will flow for the rest of Egyptians to wake up and the rest of the world to understand that we are adamants of bringing democracy to our country,” Haddad said.