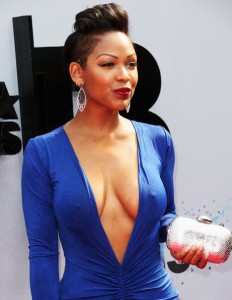 Popular actress Meagan Good, who is well known for role as Mya in the hit movie Think Like A Man staring Superstar Comedian Kevin Hart showed a little too much of herself at the just concluded BET awards.

Meagan is reportedly married to pastor Devon Franklin, they have iniatilly dated for 10 months before tying the knot together, she also spoke about remaining celibate before they officially became husband and wife.

Although she was not raised in a church, Good says she is a christian and considers herself very spiritual and has said many times that she will not do roles that she feels disrespects God and that Jesus is her hero

But When she stepped out at the 2013 BET Awards at Nokia Theatre L.A. Live in Los Angeles, California on Sunday, the 31-year-old actress flaunted her cleavage in a plunging blue gown.