Governors from opposition political parties said that the crisis in Rivers State was engineered to punish its governor, Rotimi Amaechi for winning the chairmanship election of the Nigeria Governors’ Forum. 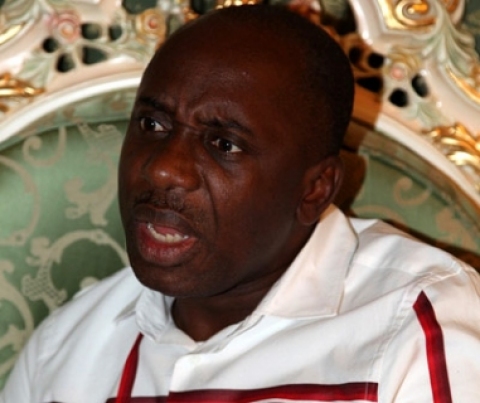 The governors said this in a statement issued in Abuja on Thursday, and declared that what was happening in the state was an assault on Nigeria’s democracy.

The governors (11) were among the 19 governors that voted for Amaechi during the May 24 election, where he defeated Governor Jonah Jang of Plateau State, who scored 16 votes.

Shortly after the outcome of the election, the Peoples Democratic Party suspended Amaechi from the party.

Events in Rivers State resulting in the shameful occupation of the State Government House by members of the Nigeria Police Force on Wednesday, July 10, 2013 are a direct assault on Nigeria’s democracy.

These developments are not only worrisome but outrightly condemnable as an affront on the constitution of the Federal Republic of Nigeria.

The Progressive Governors’ Forum (PGF) unequivocally condemns the ill-disguised attempt to create a State of Emergency in Rivers State by plunging the State into a needless and avoidable crisis.

All available evidences surrounding the events of Tuesday and Wednesday, July 9 & 10 indicated that the Rivers State Police Commissioner, Mr. Joseph Mbu and his men did not act in a professional manner. Before now, the State Police Commissioner has exhibited very clear bias against the Governor and other State Officials. This is a dangerous development that would only produce anarchy with unpredictable consequences.

Events of July 9 &10 in Rivers State represent acts sponsored by anarchists whose interest include subverting our democracy and expose the lives of democratically elected representatives to great danger.

As it is today, the orderly conduct of democratic institutions in Rivers States have been impaired and the life of Governor Amaechi and his team are in great danger. The constitutional responsibility of the State House of Assembly is being impeded and in the circumstance the House of Representatives has voted to take over the functions of the State House of Assembly as provided under section 11(4) of the 1999 Constitution.

It is very clear to all discerning Nigerians that the crisis in Rivers State is a product of intolerance and highhanded attempts to undermine our rights as Governors acting under the Nigeria Governors Forum (NGF) to freely choose our leaders. Having elected Governor Amaechi on May 24 as the Chairman of NGF, the anti-democratic forces against the election are now using other security agencies to threaten and intimidate Governor Amaechi and in the process engineer anarchy and endanger innocent lives and property in Rivers State.

This is not only a condemnable act but a gross abuse of power. We strongly call on President Goodluck Jonathan to not only exercise his moral authority, but also apply his constitutional responsibilities to ensure the restoration of peace and protection of the Governor and all citizens.

Should the crisis in Rivers State continue and anything happen to the Governor or any official for that matter, the Nigerian leadership wouldn’t be absolved of responsibility.

We call on all Nigerians to do all within their powers to prevail on all in positions of trust and responsibilities to exercise their power with restraint and refrain from steps that might plunge this fragile democracy into a descent to depravity.