A ghastly motor accident has claimed the lives of a pastor who was burnt to death and four others along Ibusa-Ogwashi-Uku,   while the wife of the pastor is presently hospitalised. 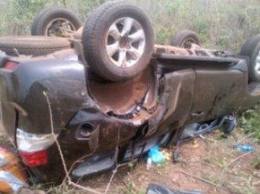 Our reporter gathered that the accident occurred on Thursday afternoon along Asaba-Ogwashi road before Ibusa roundabout made sympathizers to weep freely as a result of the gory site.

One of the witnesses told Saturday Vanguard that “it was terrible. We watched the Pastor being roasted alive. Efforts to rescue him were frustrated by the raging fire”.

The witness stated that the pastor while trying to avoid a speeding tanker by the roundabout veered into the bush but the same tanker also lost control and rammed into his car which caught fire instantly.

Saturday Vanguard gathered that the wife of the pastor who was rushed to Ibusa General Hospital  was badly wounded. She was the one who disclosed that one of the four dead persons was her husband.