Most of us know Nelson Mandela as the South African revolutionary and politician whose long imprisonment became a rallying cry for dismantling apartheid. We know that he went on to be elected the first black president of the Republic of South Africa in the first open election in the country’s history and that he has remained one of the most inspiring and admired men in modern history. 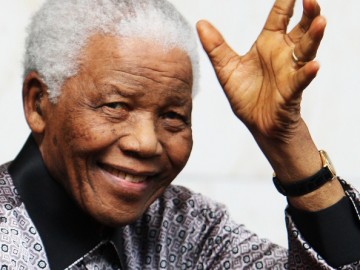 But there’s so much more to know. Consider the following:

1. His parents didn’t name him Nelson

Upon his birth on July 18, 1918, he was named Rolihlahla Dalibhunga Mandela. He attended primary school in Qunu where his teacher gave him the name Nelson, in accordance with the tradition of giving “Christian” names to students.

2. He was a poor student

Mandela was expelled from the University College of Fort Hare for his participation in a student protest. He completed his BA through the University of South Africa before attending the University of the Witwatersrand for his law degree. By his own admission, he was not a very good student and left in 1948 without graduating; he also was unable to complete a law degree that he started at the University of London . It wasn’t until his last months in prison that he obtained his undergraduate law degree. He now has more than 50 honorary degrees from international universities.

3. He traveled under an alias

In 1962, he took on the alias David Motsamayi and secretly left South Africa for other parts of Africa and England to rally support for the liberation movement and the African National Congress (ANC); he received military training in Morocco and Ethiopia .

4. He was a master of disguise

Forced to go underground to evade the police, Mandela disguised himself as a chauffeur, a chef and a garden boy. “I would wear the blue overalls of the fieldworker and often wore round, rimless glasses known as Mazzawati teaglasses. I had a car and I wore a chauffeur’s cap with my overalls. The pose of chauffeur was convenient because I could travel under the pretext of driving my master’s car,” he wrote in his autobiography, “Long Walk to Freedom.”

5. Some of his most famous words were spoken in court

In 1963, Mandela and nine others went on trial for sabotage in what became known as the Rivonia Trial, when he delivered his famous speech in which he concluded, “During my lifetime I have dedicated myself to this struggle of the African people. I have fought against white domination, and I have fought against black domination. I have cherished the ideal of a democratic and free society in which all persons live together in harmony and with equal opportunities. It is an ideal which I hope to live for and to achieve. But if needs be, it is an ideal for which I am prepared to die.” Facing the death penalty, they were convicted and sentenced to life imprisonment.

6. His principles were more important than freedom

He spent 27 years in prison until his release in 1990, nine days after the unbanning of the ANC. Throughout his imprisonment he had rejected at least three conditional offers of release.

7. He was deluged with ticker tape

In 1990, he embarked on a world tour, visiting British Prime Minister Margaret Thatcher, the U.S. Congress, and U.S. President George H.W. Bush. An estimated 400,000 attended a ticker tape parade through the canyons of Wall Street in his honor.

Umleqwa (farm chicken), ulusu (tripe), and amasi (sour milk) are among his favorite foods. His chef since 1992, Xoliswa Ndoyiya, published a cookbook with his favorite recipes.

9. He was a concert promoter

Mandela was the driving force behind the 2003 AIDS awareness event in Cape Town called the 46664 Concert. The huge event included performances by Beyonce, Peter Gabriel, Bono, Bob Geldof and many more. The name of the concert references Mandela’s prison number.

10. His honors have no limits

Mandela has received more than 695 awards, including the Nobel Peace Prize and the U.S. Congressional Medal. In addition to his honorary degrees, he has also been bestowed with honorary citizenships, organization memberships, and a large number of streets, buildings, schools and other various things have been named for him — and his influence can even be seen in Hollywood. In “The Cosby Show,” the grandchildren of Cliff and Clair Huxtable, Winnie and Nelson Tibideau, were named after Mandela and his former wife.