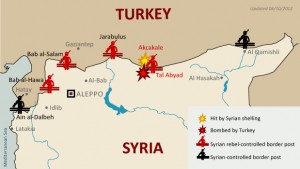 A car bomb has exploded on the Syrian side of the main Bab al-Hawa crossing with Turkey killing at least seven and injuring many more, according to Turkish news agency Dogan.

The explosion on Tuesday occurred at a roadblock manned by brigades at the entrance of the rebel-held crossing, several hundred metres from the Turkish side, Syrian opposition activists on the border said.

Pictures taken by activists on the scene showed several burnt and mangled cars and an engine block that apparently flew to the side of the road from the vehicle.

“The objective is to destabilise security at the crossing. The casualties are all civilians, from the people queuing to cross,” Omar Aref, one of the activists, said.

Aref also told Reuters news agency that the casualties were all civilians.

In the deadliest incident, a bomb exploded on February 11 in the area that lies between the Turkish and Syrian control posts and killed 13 people, among them three Turks.

“This is indicative of a worsening situation right across the border,” our correspondent said.

Tuesday’s car bombing near the Bab al-Hawa crossing came a day after Turkey shot down a Syrian helicopter that it said had violated Turkish airspace.

The aircraft had landed inside Syrian territory.

The Syrian army said the shooting was “hasty” and accused the Turkish government, which backs the uprising against Syrian President Bashar al-Assad, of trying to escalate tensions along the border.

In a related development, the Syrian Observatory for Human Rights (SOHR) reported on Tuesday that one of the two helicopter pilots had been killed.

The monitoring network cited videos circulated by opposition fighters showing rebels surrounding the body of one of the men who had parachuted from the helicopter.

Elsewhere in Syria, loyalist troops seized control of parts of a town located on the strategic road linking Damascus to the international airport, SOHR said on Tuesday.

Clashes pitting rebels against troops raged on in the town of Shabaa, where fighting on Monday killed at least 11 opposition fighters.

State news agency SANA said loyalists “seized control last night of the town of Shabaa, after a special operation that was speedy and surgical, and which was aimed at capturing the most dangerous terrorist groups there”.

Al-Manar, the Lebanese TV station of Assad’s ally Hezbollah, said loyalists found “a 500-metre tunnel parallel to the Damascus airport road, that the terrorists were using to hide and fire … from”.

Al-Manar screened footage it said was taken inside Shabaa.

It also showed footage of the advancing army, whose tanks fired at buildings in the town.

The Syrian army has struggled for months to eliminate rebels positioned around Damascus. [AlJazeera]