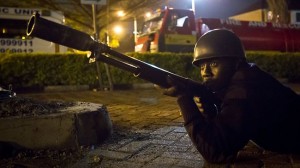 An unknown number of hostages are still being held by Islamist gunmen who are locked in a stand-off with security forces inside Nairobi’s Westgate shopping mall, the Kenyan government said early Sunday.

“Hostage numbers still unknown, but they are in several locations. No communication as yet. Upper levels (of the mall) have been secured,” the government’s National Disaster Operation Centre said in a situation update posted on Twitter.

An AFP correspondent at the scene said operations by security forces were continuing, 17 hours after the attack began and as dawn approached in the Kenyan capital.

“The work is continuing, but you cannot rush these things,” an army officer posted on the perimeter cordon said.

“Our teams are there, we are watching and monitoring, we will finish this as soon as we can.”

Earlier today, Kenyan President Kenyatta gave a televised address to the nation about the tragedy which had claimed the lives of so many including several members of his own family.

He said Kenya had “overcome terrorist attacks before, and we will defeat them again,” and told the nation he had also “personally lost family members in the Westgate attack”.

“Our security forces are in the process of neutralising the attackers and securing the mall,” he said, as security operations went on late into the night.

Somalia’s Al Qaeda-linked Shebab group said its fighters were behind the attack.

“They want to cause fear and despondency in our country, but we will not be cowed,” Kenyatta said, adding:”Terrorism is a philosophy of cowards.”
Nairobi shopping centre attack

“I ask God to give you comfort. My government will provide the support needed in the days to come,” he said. The death toll was expected to climb. Authorities still had not secured the mall when President Kenyatta spoke. There are unconfirmed reports on Twitter that several gunmen remain at large.

His televised address came after masked gunmen stormed the packed upmarket shopping mall in Nairobi. The rebels said the carnage was in direct retaliation for Kenya’s military intervention in Somalia, where African Union troops are battling the Islamists.

“The Mujahideen entered #Westgate Mall today at around noon and are still inside the mall, fighting the #Kenyan Kuffar (infidels) inside their own turf,” the group said on Twitter.

The Shebab tweet said the group’s warnings over Kenya’s military presence in Somalia had been ignored. Shebab “on numerous occasions warned the Kenyan government that failure to remove its forces from Somalia would have severe consequences,” it said.
Kenya Mall Attack

Shoppers flee the Westgate Mall in Nairobi, after gunmen told Muslims to leave and that non-Muslims would be targeted. Picture: AP

“The Kenyan government, however, turned a deaf ear to our repeated warnings and continued to massacre innocent Muslims in Somalia #Westgate,” the group tweeted via its @HSM_Press account. “The attack at #WestgateMall is just a very tiny fraction of what Muslims in Somalia experience at the hands of Kenyan invaders,” it said.

Kenyan forces entered Somalia two years ago to fight the Shebab, and remain in the country as part of an African Union force that is supporting Somalia’s internationally backed government.

The Twitter account of Somalia’s Al Qaeda-linked al-Shabab rebels has been suspended after they used the site to claim responsibility for the attack on the Nairobi shopping mall following a campaign against the account by users of the microblogging site.

A message from Twitter on the English-language HSM_Press account read that the account was suspended, the third time this year that the group has been expelled from the site.

According to Twitter, users are blocked “for any unlawful purposes or in furtherance of illegal activities”.

The Shabab’s previous account, HSMPress, was suspended in January after the group posted photographs of a French commando they killed and threatened to execute Kenyan hostages. They opened another account, HSMPress1, but were again suspended earlier this month after threatening Somalia’s internationally-backed president.

The group issued a string of messages on Twitter, claiming its fighters were behind an attack on Nairobi’s upmarket Westgate shopping mall.

Another al-Shabab tweet claimed that its fighters had killed 100 people in the attack, but President Kenyatta said 39 people had died in the attack and 150 had been wounded.

Two French citizens were killed the attack, the Elysee Palace said in a statement. President Francois Hollande “condemns the cowardly attack in the strongest terms and shares the pain of the family of our compatriots,” said the statement.