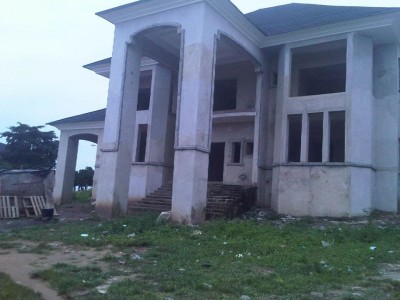 The uncompleted building where security forces killed at least seven squatters on Friday, September 20, (the figure rose to eight on Monday) in Apo, Abuja, has been revealed to belong to Mrs. Adunni Oluwole Salisu, believed to be the sister to former President Olusegun Obasanjo.

This was the findings of a PREMIUM TIMES investigation.

Documents from the Abuja Geographical Information Systems (AGIS) indicate that the property, located at No. 8 Bamanga Tukur Street, Gudu District, near the Gudu Cemetery, belongs to Mrs. Salisu.

According to PREMIUM TIMES, ownership details of property OG247326, point at Mrs. Salisu as rightful owner, but neither her, nor the former president, could be reached for comment; although authoritative family sources confirmed the ownership and the blood relationship.

Last Friday’s killing generated widespread condemnation for the security agencies involved in the extra-judicial killing of the squatters, who were mostly tricycle riders and petty traders, under the guise of anti-terror missions.

Some of the survivors currently undergoing treatment at the Asokoro General Hospital in Abuja, claimed that a representative of the owner of the house had given them a week notice to vacate the property.

But the security operatives swooped in on them in the dead of night and killed them execution style, before the expiration of the notice.

It is not known yet whether Obasanjo, who still wields considerable amount of influence, played any role in that tragic eviction operation.

Meanwhile, it was learnt that the Department of State Security Services (SSS), which led the controversial operation, had released most of the squatters arrested at the building after it was established that they had no link to any terrorist activities.