SHOCKING: Man Arrested For Flogging Mother Of Three To Death

A 35-year-old man, Mukaila Sumonu has been arrested by the Lagos State Police Command for causing the death of his neighbour in the Ikorodu area of the state. 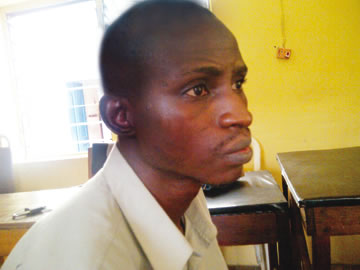 It was gathered that the suspect allegedly flogged the late, Fausat Ajibola, at their compound located in Araromi Village.

According to Police authorities, the suspect inflicted deep wounds on Ajibola, who lives in the same compound with her husband and three children.

The mother of three was said to have died a day after the flogging while the  suspect  arrested and then transferred to the State Criminal Investigation Department, Yaba, Lagos.

According to Sumonu who was close to tears said he did not have the intention of killing her but he had only meant to discipline the deceased, Fausat.

He said, “I was sitting on my own in the compound when she (Ajibola) accused me of cutting branches off the mango tree in our compound. She held me by the shirt and was almost strangling me so I wrestled free but she continued to chase me.

“Ajibola is mentally challenged so I picked up a cane and threatened to flog her with it but she continued to harass me, so I just flogged her a few times. I did not inflict a lot of wounds on her like the police are claiming.

“I was surprised the following day when residents accosted me and accused me of killing her. This is the devil’s handiwork.”

The suspect, pleaded for pardon, saying, “I have two wives and four children. Who will take care of them if I am sent to prison?”

However the  police faulted Sunmonu’s claims. A source at the SCID said Ajibola’s corpse was marked with bruises all over.

The source said, “Sunmonu is claiming that he was attacked first and that Ajibola was mentally deranged. This was a woman that was taking care of three children, cooking for her husband every day. Although, the killing may not have been deliberate, he (Summonu) still has a case to answer,” he said.

The Police Public Relations Officer, Ngozi Braide, who confirmed the incident to our correspondent on the telephone, said the suspect would soon be charged to court.