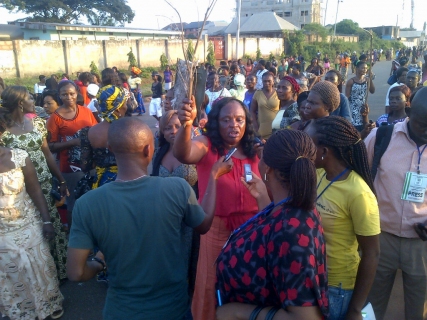 The protests by different groups in Awka on Monday over the November 16 governorship election in Anambra State, has been described as stage-managed and sponsored by the candidate of the All Progressives Congress (APC), Senator Chris Ngige.

Senior Special Assistant on Media and Publicity to Governor Peter Obi of Anambra State, Mr. Valentine Obienyem, who made this known in a statement yesterday, said that investigations revealed that those who protested, especially the women that pretended to be crying placards, were imported into the state from Osun State in five chartered luxurious buses.

He said: “Chris Ngige and his group wanted protests at all costs, but when our people, who already know him for what he is, refused, they had to go to Osun State.

“Even when they imported some boys from Imo State to protest as students, the Vice Chancellor of Nnandi Azikiwe University, Prof. Egboka, was alarmed when contacted on phone. He had to rush down to the school for investigations.  Having discovered that those involved were not his students, he warned against those who lost and said he had checked with all his relevant officials who confirmed that the story of UNIZIK students was fallacious. We have our respects, belief and integrity”.

Gov. Obi’s media aide added that upon further investigation and interrogation of the boys, they confessed that some persons purportedly from the APC paid them N1,500 each and chartered the buses that conveyed them from Imo State to Anambra.