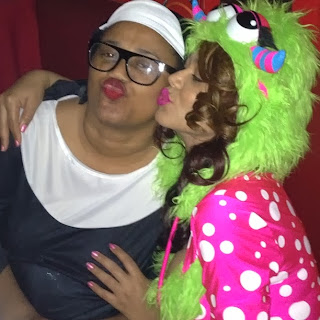 For leading Ghanaian actress, Nadia Buari and making her believe he would settle down with her, and finally breaking her heart, Nigerian actor, Jim Iyke will suffer untold hardship, according to the mother of the heart-broken Nadia, Hajia Buari.

The love birds were so close and appeared so much in love and everyone thought that it was just a matter of time before they tie the knot, until Jim posted on his Twitter handle that he was not going to marry the Ghanaian beauty, while Nadia herself responded by deleting Jim’s pictures from her Instagram account.

After the celebrated break-up, Hajia Buari, according to a Ghanaian entertainment site, had this to say:
“They were great together. They were like a couple and we thought they were heading for the altar. She was very connected to him.”

“She has talked to me about getting married and having children. She plans on settling down but not right now. She has to focus on her career. That Nigerian boy will suffer for daring to break my baby’s heart,” another source in Ghana quoted the angry Hajia Buari as saying