Islamic State of Iraq and al-Sham militants say sorry for decapitating a fellow extremist rather than enemy. 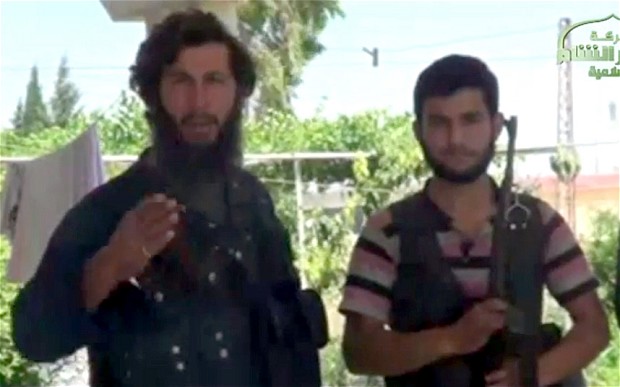 Militant Islamist rebels in Syria linked to al-Qaeda have asked for “understanding and forgiveness” for cutting off and putting on display the wrong man’s head.

In a public appearance filmed and posted online, members of Islamic State of Iraq and al-Sham, one brandishing a knife, held up a bearded head before a crowd in Aleppo.

They triumphantly described the execution of what they said was a member of an Iraqi Shia militia fighting for President Bashar al-Assad.

But the head was recognised from the video as originally belonging to a member of Ahrar al-Sham, a Sunni Islamist rebel group that often fights alongside ISIS though it does not share its al-Qaeda ideology.

After inquiries, an ISIS spokesman admitted he was Mohammed Fares, an Ahrar commander reported missing some days ago.

This could not be independently confirmed, but in an earlier video of a speech by Mr. Fares he bears a close resemblance to the severed head in the later video.

The Syrian Observatory of Human Rights, which monitors deaths in the Syrian conflict, and several activists on social media said that ISIS fighters misunderstood comments Mr. Fares made referring to the Imams Ali and Hussein, the founding fathers of Shiism.

An ISIS spokesman, Omar al-Qahtani, confirmed that Mr. Fares had been injured and, thinking he had been captured by members of a Shia militia against which he was fighting, asked them to kill him in terms misunderstood by the ISIS members in fact taking him to hospital.

It is thought he was wounded in the battle for Base 80, a military zone being fought over near Aleppo.

In explaining the error Mr. al-Qahtani made reference to a story in which Mohammed said Allah would forgive a man who killed a believer in error.

The mistake, of a sort commonly cited as an argument against the death penalty around the world, is indicative of the chaos within rebel ranks, particularly since the rise of ISIS over the summer.

Several other Islamist groups have formed alliances without its participation, but it continues to exercise control over large areas of northern Syria.

Its ferocity has given rise to an exodus of moderate and secular activists, and brought to an end an uneasy truce between the Free Syrian Army and Kurdish militias, the most prominent of which has in the last month taken on ISIS and driven them out of a number of towns in the north-east.

Meanwhile, Mr. Assad’s forces have used the internal rifts in their enemies’ ranks to make progress on a drive south-east of Aleppo.

This week, a group of Islamist rebels put out an appeal for a mass mobilisation against the advance, while there are repeated rumours that major Islamist militias which do not support al-Qaeda are about to declare a common front.

Mr. Qahtani said the incident would be investigated by the appropriate judicial authorities.