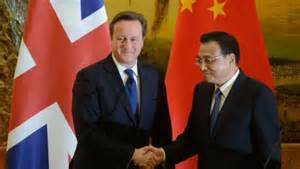 Britain should recognise it is not a big power but “just an old European country apt for travel and study”, Chinese state-run media snapped as Prime Minister David Cameron visited.

“China won’t fall for Cameron’s ‘sincerity’,” the headline of the sharply-written editorial in the Global Times newspaper said, after Beijing was outraged by Mr Cameron’s meeting with the Dalai Lama last year.

The meeting had led to a diplomatic deep-freeze between the two nations. But on Monday the British prime minister met Chinese Premier Li Keqiang in Beijing where he signed a series of trade deals, before holding talks with President Xi Jinping.

On Tuesday Mr Cameron continued what embassy officials said was the largest ever British trade mission to China with a visit to the commercial hub Shanghai.

The prime minister has taken more than 100 business people with him to China, including the heads of Jaguar Land Rover, Rolls Royce and Royal Dutch Shell and the chief executive of the London Stock Exchange.

The prime minister met with Jack Ma, founder of China’s leading e-commerce firm Alibaba and the eighth richest man in the country, and Li Shifu, the chairman of Geely, one of China’s biggest car makers.

Earlier this year Geely bought the makers of the London taxi, Manganese Bronze Holdings, after acquiring Sweden’s Volvo in 2010.

Mr Cameron has kept human rights firmly on the sidelines during his time in China, but the Global Times said his three-day visit “can hardly be the end of the conflict between China and the UK”.

“Beijing needs to speed up the pace of turning its strength into diplomatic resources and make London pay the price for when it intrudes into the interests of China,” the editorial said.

“The Chinese government will surely show courtesy to Mr Cameron. But the public does not forget his stance on certain issues,” the paper added.

The editorial also criticised what it called London’s interference in the “transition process” of Hong Kong, a British colony before its reversion to China in 1997. It is due to adopt universal suffrage to choose its chief executive in four years’ time.

The paper warned that “Sino-British ties can be halted again” over the issue.

“The Cameron administration should acknowledge that the UK is not a big power in the eyes of the Chinese,” it added.

“It is just an old European country apt for travel and study.”

The Global Times has close ties to the ruling Communist Party and often takes a nationalist stance.

A more conciliatory editorial appeared in the China Daily, which said Mr Cameron’s visit would help “pave the way for bilateral ties to flourish”.

“The ups and downs in their ties show it is crucial that the two countries respect each other’s core interests, handle their differences in a proper and acceptable manner and look forward to the future fruit of their cooperation,” the editorial said.