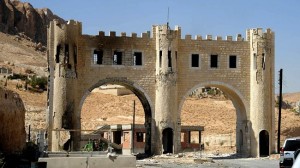 Opposition fighters have abducted 12 nuns from a predominantly Christian village near Damascus and taken them to a rebel-held town, the mother superior of a Syrian convent says.

The statement by Febronia Nabhan, Mother Superior at Saidnaya Convent, came as Syria’s state TV reported that a suicide attacker set off his explosive vest in an unspecified government institution in Damascus, killing four and wounding 17. The TV gave no further details about the blast in the central Jisr Abyad neighbourhood.

Such blasts in Damascus are not uncommon. Some have killed scores of people in the city.

Sister Nabhan said the nuns and three other women were taken the day before from another convent in the predominantly Christian village of Maaloula to the nearby town of Yabroud.

Syrian rebels captured large parts of Maaloula, some 60 kilometres northeast of the capital, on Monday after three days of fighting.

Sister Nabhan said the Maaloula convent’s mother superior, Pelagia Sayaf, called her later that day and said they were all “fine and safe”.

The state news agency SANA had reported Monday that six nuns, including Sayaf, were trapped in a convent in Maaloula.

In September, rebels seized parts of Maaloula only to be driven out within a few days by government forces.

Maaloula was a major tourist attraction before the conflict began in March 2011. Some of its residents still speak a version of Aramaic, a biblical language spoken by Jesus.