A statue of Nelson Mandela, South Africa’s first black president, has been unveiled in the capital, Pretoria, a day after he was buried. The nine-metre bronze statue has been erected at the Union Buildings, the government headquarters. 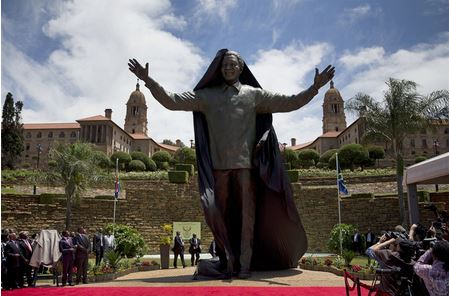 This followed a 10-day period of mourning and celebrating Mr Mandela’s life after his death at the age of 95.

Mr. Mandela was given a state funeral at his ancestral home in Qunu in the Eastern Cape on Sunday.

African National Congress members, veterans of the fight against apartheid and foreign dignitaries – including several African presidents and the Prince of Wales – were among the guests.

The statue was unveiled by President Jacob Zuma on South Africa’s Day of Reconciliation, a public holiday which marks the end of racial conflict in South Africa.

During his address at the funeral on Sunday, Mr Zuma pledged to build on Mr Mandela’s legacy.

“As you take your final steps, is that South Africa will continue to rise… because we dare not fail you,” he said.

Mr Mandela’s body lay in state at the Union Buildings, where he served as President, and where, decades before, the minority-white regime enforced its often harsh apartheid system that denied rights to blacks and other people of color, confined them to urban ghettos and imprisoned Mandela for 27 years. For three days last week, at least 100,000 people filed past his open casket to pay their last respects.

A few days before that, workers moved quietly behind a few scattered opaque screens to weld together what will be a 30-foot-tall likeness of the nation’s first black president and anti-apartheid leader. The statue was erected on Friday, but remained shrouded until a public unveiling Monday.

Workers were tight-lipped and said they had signed non-disclosure statements as a condition of their labor to avoid much public attention on the statue in advance of Monday.

The statue was funded by the South African government and is being erected by a private engineering company.

As Mandela’s casket was taken away for the evening after the first of three days of public display, the new replica of his head had been welded in place, the still-armless body resting face down.

There are already a number of dedicated monuments to Mandela in his homeland including this statue at Nelson Mandela square in Sandton, Johannesburg:

This statue depicts Mandela through a series of bevelled posts – it stands near Howick in South Africa:

This one is at Cape Town:

Visitors mimic the pose of this Mandela statue outside the Groot Drakenstein correctional facility near the town of Franschhoek, South Africa:

And, of course, a bust of Mandela is watchful at the entrance to Robben Island ferry departure point at the V&A waterfront in Cape Town: