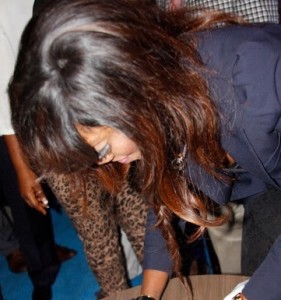 Information coming from the Victoria Island police station indicates that MAVIN singer, Tiwa Savage, was in hot soup last Saturday and was almost charged to court until she swallowed her pride and apologized to the police she had assaulted after she was stopped for violating traffic laws.

“Tiwa Savage refused to stop at a traffic light around Adetokunbo Ademola Street near Eko Hotel and Suites. When we attempted to accost her, she refused to park her car as instructed by the policemen.

“Since there was a traffic snarl at the time, a policeman followed her car and insisted that she must stop. After a while, she stopped and started raining abuses on all of us so, we took her to the station…

“On getting to the station, a senior officer advised her to apologise because she was wrong and there were even eyewitnesses at the scene who could testify against her if the matter was taken to court. She apologised.”

A police source said the senior office on duty took pity on Tiwa Savage when it became obvious that she had realised her wrong action. He then asked his boys to release her and drop the charge against her.