The leadership of the opposition All Progressives Congress may have decided on Major-General Muhammadu Buhari and Senator Bola Tinubu as party’s presidential and vice-presidential candidates, This Day reports citing ‘reliable party sources’. 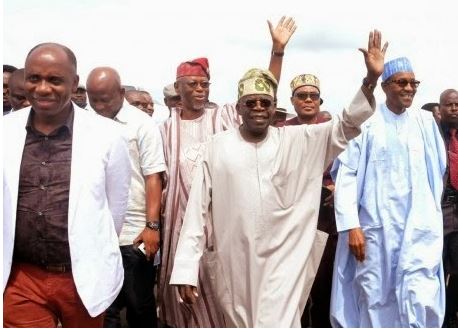 This information comes a week after Sunday Independent gathered that the APC settled on Buhari as its presidential candidate as, allegedly, he could guarantee vast support for the party from the North-West and North-East.

The former head of state obtained an APC membership card in February 2014. However, the first indications that Buhari might contest the party’s presidential primary emerged in August 2013.

According to This Day’s sources, the party’s decision was informed by the massive votes that the pairing of Buhari and Tinubu could gain during the election as Buhari is very popular at the grassroots level in most parts of the North-West and North-East, while Tinubu comes from the South-West.

APC’s strategists also suppose that with Tinubu as Buhari’s running mate the duo will be able to secure the bulk of the 2,941,214 votes cast for President Goodluck Jonathan in the South-West and Edo State in 2011.

“With Buhari and Tinubu as presidential and vice-presidential candidates respectively, our goal is to secure the core north and South-west, which are the most populous sections of the country and can guarantee us at least 50 per cent of the total votes in the country during the presidential election,” an APC source told This Day.

On the impact of the Muslim-Muslim ticket on the electorate, especially with the insurgency in the North-East, the source said the party had decided to forge ahead with the ticket because it is certain that it has a winning formula, ” irrespective of the accusations by the ruling Peoples Democratic Party (PDP) that APC is a Muslim party“.

“Like most South-Westerners, Tinubu is quite liberal and we hope this would persuade Christian voters that they have nothing to fear. So Buhari and Tinubu have reached a quiet agreement to contest on a joint platform, with the latter already setting up structures nationwide,” the source added.

The source said that by fielding Buhari and Tinubu, former Vice-President Atiku Abubakar – who joined APC recently – has effectively been left out in the cold.

Another party source, when asked how Rotimi Amaechi who has been against a Muslim-Muslim ticket reacted to the pairing of Buhari and Tinubu, said that the issue had been discussed and the party had decided to handover the party leadership to the members of the so-called ‘new PDP’.

To recall, seven PDP governors – Amaechi among them – had announced their decision to join the APCon November 26.

“Our plan is to ensure Amaechi secures the senatorial ticket on our platform and wins the election to go to the Senate. “But before this happens, we shall immediately make Sam Jaja, who is his kinsman, the chairman of APC. Then when Amaechi becomes a senator, our goal is to see him emerge as the senate president, following which Jaja will be asked to step down as the party’s chairman to ensure ethnic balancing,” the source said.