Barely 48 hours before Chelsea confront PSG in the first leg of their Champions League quarter final match, former England winger, David Beckham has predicted who would win the tie. 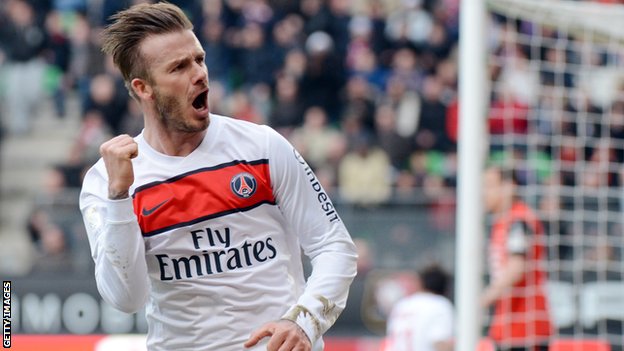 Beckham, who used to play for the French side, believes former club Paris Saint Germain would spring a shock and knock Jose Mourinho’s Chelsea out of the Champions League.

The retired midfielder spent the final six months of his career in the French capital, and reckons the likes of Zlatan Ibrahimovic and Thiago Silva can inspire the Ligue 1 champions to victory over the Blues in Wednesday’s quarter final.

He said: “Every time people mention PSG to me, I smile because I had six months of pleasure there with the players I was playing with, with the fans, the club – it’s such a great club.
“I was welcomed by the club with open arms, it was an incredible six months. The position they’re in, they’ve got such a strong unit, with strong players.

“The owners that run the club, they want to best and they’ve got the best. Thiago Silva, for instance, is the best defender in the world.

“Zlatan is a character but he’s also one of the best players I’ve played with. He’s a great man. He’s a player that I loved playing with.

“I think they’ve got a real chance in the Champions League this year. They’re coming up against a Chelsea team, with Jose Mourinho as manager, he takes the team to a different level but I do think that they (Chelsea) have a good chance.”