The new details and reactions on new Boko Haram video have emerged. In a 37-minute long video obtained by AFP and revealed on March 24, 2014, Monday, a man claiming to be the leader of Boko Haram sect, Abubakar Shekau, speaks in the local Hausa and Kanuri languages, as well as in Arabic. 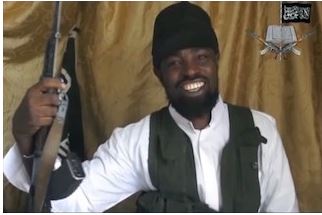 The man confirmed Boko Haram was responsible for the attack on Giwa Barracks in Maiduguri, Borno State, on March 14, 2014. Some video fragments of the operation were also present in the footage.

It showed what appear to be heavily armed Boko Haram fighters arriving in pick-up trucks and firing on the Giwa barracks in Maiduguri with assault rifles and rocket propelled grenades.

Then the video captured hundreds of people, most of them young men in civilian clothes, but also some women, apparently running away from the compound.

Boko Haram claimed in the video that they freed about 2,000 of their brothers in arms, some of whom recounted at length their experience at the facility, alleging torture by the military.

“We launched the Maiduguri attacks and killed infidels in Giwa barracks,” said the man who insists several times that he is Shekau, adding a warning about members of the public who have joined civilian vigilante groups against them.

“There are only two groups of people in the world. There are either those with us, or those on the other side, which I’ll kill once I spot them. This is my only focus now,” he said.

The video repeats claims made in a previous video obtained on February 19 about Boko Haram members killing a prominent Muslim cleric who had criticised the group and threatening to attack oil wells in southern Nigeria.

However, the people who saw the full video noted that the man on the screen appeared younger, thinner and with different mannerisms from older videos. This revives the old question: Is Shekau alive or not?

See and compare the present and the previous photos:

The DHQ spokesman, Chris Olukolade, has previously said that whoever was making the claims in the videos was immaterial.

It would be recalled that the U.S.A. has declared Shekau a global terrorist and put a USD 7 million (EUR 5.1 million) bounty on his head. Nigeria has separately offered N50m (approx. USD 300,000) for information leading to his capture or death.

Shekau was reported to have been killed in a gun battle in northeast Nigeria between July 25 and August 3 last year, although a man resembling him has featured in a number of videos since then.