Malaysian Airlines assumes “beyond any reasonable doubt” that the missing flight MH370 is considered lost and there are no survivors. 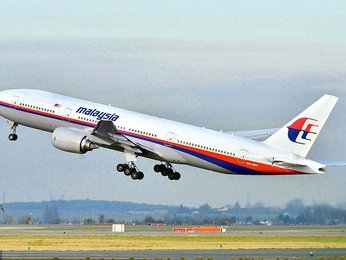 This statement was sent as a text message to the families of those, who were on board, as reported by the BBC. Malaysian Airlines officially confirmed the fact they sent the message.

The flight MH370, Malaysian airlines, with 239 passengers on board, has been missing since March 8th. The plane took off at Kuala Lumpur and never landed at its destination in Beijing.

It has now been 5 days since the search operation has been held in the southern Indian Ocean.

It has been 17 days that over 25 countries are searching for Malaysian plane MH370, its 239 passengers and crew.

The statement released by Malaysia’s Prime Minister was referring to a brand new analysis by UK’s Air Accidents Investigation Branch and Inmarsat, satellite data was provided and it was proven that the plane flew along the southern corridor, with its last position being in the middle of Indian Ocean, to the west of Perth.

“This is a remote location, far from any possible landing sites. It is therefore with deep sadness and regret that I must inform you that, according to this new data, flight MH370 ended in the southern Indian Ocean.”

At 14:45 local time (06:45 GMT) one of the search planes, an Australian one, had spotted two unidentified objects in the search area, both are to be picked up any moment now as a ship had arrived at that area to pick them up, according to Malaysia’s transport minister.

The objects noticed were unusual – one was circular grey or green and the other object was rectangular orange one, as claimed by Australian PM Tony Abbott.

There is yet no official information whether the objects are from fligh MH370 or not.

“The Australian Maritime Safety Authority has advised that objects have been located by a Royal Australian Air Force P3 Orion. And I can advise the House that HMAS Success is on scene and is attempting to locate and recover these objects,” as Mr Abbott told the Australian parliament earlier today.

Several other objects in totally different zone, were spotted earlier by a Chinese aircraft, they were white, square-shaped ones. The search area has been scoured by 10 planes and they now have left it.

The search goes on in the Southern part of Indian Ocean.

As it was claimed by BBC reporters, the navy ship which is on mission to pick up possible debris, will face many challenges. The waters are treacherous and very remote and the ship has to navigate to find necessary clues. Moreover, the search could be hampered in the ocean storms that are coming.

List of the passengers of MH370 has been released here. The passengers #63 Kozel/Christian (Pouria Nourmohammadi Mehrdad) and #101 Maraldi/Luigi (Delavar Seyed Mohammedreza) were those with stolen passports (as reported earlier).

Malaysian Airlines posted a media statement, a letter of condolences to all the relatives of MH370 passengers: