The Rivers State Police Command on Monday arrested a 30 year-old man a large quantity of explosives, including detonators and a cordless wire. 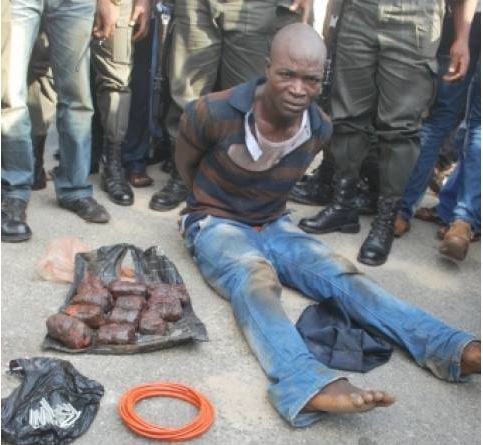 The suspect, who was identified as Ibrahim Aliyu was apprehended in Ndele Town in Emohua Local Government Area of the state at about 2.30pm.

State Commissioner of Police, Mr. Tunde Ogunsakin, told newsmen in Port Harcourt that Aliyu confessed to be a member of a kidnap syndicate based in Ogbogoro Town in Rivers State.

Aliyu, according to the state police boss, was also a member of a bank robbery syndicate that operates between Port Harcourt and Akwa Ibom State.

Ogunsakin disclosed that the suspects had confessed that though he (Aliyu) purchased the explosives in Port Harcourt, his aim was to take them to one ‘Alhaji’ in Yobe State.

“The Rivers State Police Command wished to inform the general public that in its bid to rid the state of undesirable elements, has nabbed one Ibrahim Aliyu (male, age 30 years) from Ndo village in Agbada LGA of Nasarawa State.

“He was arrested in Ndele Town in Emohua LGA of Rivers State on March 17, 2014 at about 2.30pm with a huge quantity of dynamite explosives with their detonator and cordless wire.

“The suspect confessed to be a member of a kidnap syndicate based in Ogbogoro Town and a member of a bank robbery syndicate that operates between Port Harcourt and Akwa Ibom State.

“On interrogation, the suspect confessed to have bought the explosives from Port Harcourt with the intent to take them to the North to one Alhaji in Yobe State,” he stressed.

The State Commissioner of Police, however, reiterated his call on criminals to leave Rivers or be ready to face the wrath of the law whenever they were caught.