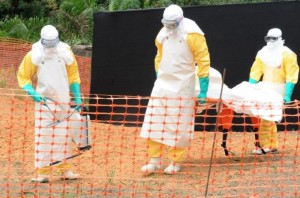 Liberia is dealing with its first suspected Ebola case, which is thought to be unconnected to the epidemic raging in Guinea and to have originated separately within its borders.

“We have a case in Tapeta where a hunter who has not had any contact with anyone coming from Guinea got sick,” chief medical officer Bernice Dahn said on Thursday.

“He was rushed to the hospital and died 30 minutes later. He never had any interaction with someone suspected to be a carrier of the virus and he has never gone to Guinea. This an a isolated case.”

If confirmed, the case in the eastern town of Tapeta would mark a worrying development in the fight against Ebola, as cases so far have been attributed to people returning with the infection from neighbouring Guinea, where 84 people have died.

The fruit bat, thought to be the host of the highly contagious Ebola virus, is a delicacy in the region straddling Guinea, Liberia and Sierra Leone, and experts suspect huntsmen may be the source of the outbreak.

Tapeta, a small town in the eastern county of Nimba, is 400 kilometres from the epicentre of the Ebola outbreak in southern Guinea, at least a five-hour drive and much further from the border than other suspected cases.

“The huntsman has 500 traps in the forest. He felt sick in the forest and was rushed to the hospital,” Dahn told AFP news agency, adding that seven new patients brought the total suspected Ebola cases in Liberia to 14.

Of the deaths, two are laboratory-confirmed Ebola cases: a woman who died in hospital in the northern county of Lofa and her sister who visited her.

No treatment or vaccine is available, and the World Health Organization said on Wednesday the fatality rate in Guinea so far stands at 65 percent, with the virus mainly hitting adults aged 15 to 59.

“We are now keeping surveillance on 44 people who have been in contact with the cases reported,” Dahn said.

French health authorities on Thursday put doctors and hospitals on alert to report any signs that an Ebola virus outbreak affecting West Africa had infected patients in France, though no symptoms had yet been detected.

France maintains close relations with several former colonies in the region, with immigrants and the employees of French multinational firms travelling frequently back and forth.