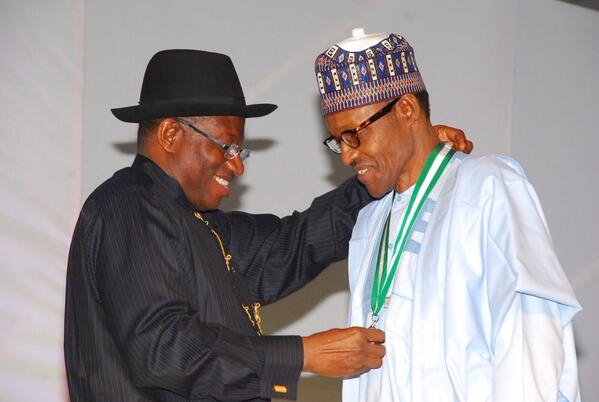 President Goodluck Jonathan has commended former head of state, General Muhammadu Buhari for his very statesman-like views on terrorism and insecurity in Nigeria as expressed in his recent article which was widely published by the media.

Buhari, who is a national leader of the opposition All Progressives Congress, APC, had in a statement, in reaction to the bombing of a motor park in Nyanya, Abuja, said masterminds of the dastardly act had declared war on all that is decent and good.

His stand, as expressed in the article, according to President Jonathan, is that of a true patriot, respected former Head of State, revered elder statesman and nationalist.

Jonathan in a State House Press Release signed by his Special Adviser on Media and Publicity, Reuben Abati, Wednesday, welcomed Buhari’s call on all Nigerians to remain steadfast and work in unity to overcome terrorists and other merchants of death who currently threaten national security.

The statement reads in part: “President Jonathan fully shares General Buhari’s view that a minority must never be allowed to ‘bring the nation to its knees through terror’.

“He has noted General Buhari’s recommendation that the nation’s counter-terrorism strategies be further fine-tuned and welcomes his kind offer of support and co-operation in dealing with the challenge of terrorism”.

While further assuring the APC chieftain of his preparedness to work with him and all other patriotic Nigerians, irrespective of their political affiliations, to strengthen national security and end the scourge of terrorism, the president reiterated his administration’s commitment and dedication to the successful prosecution of the fight against terrorism and all other threats to national security.