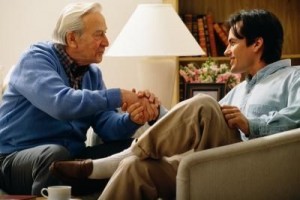 It might seem a little old school, but before you pop the question to your girlfriend, it is a good idea to approach her father for permission. This involves more than a quick, “Oh by the way, can I marry your daughter” during half time. While the traditional reasons for asking are now obsolete, popping the question to her father is a sign of respect and should be thought out and prepared for. No matter how well you know her dad, you’ll be surprised at how nervous you’ll be.

To help you overcome any anxieties you might have, we’ve come up with four tips to help you pop the question to her father.

Assess the situation
Before popping the question to her father, make sure you and your girlfriend are on the same page. Does she really want to marry you? Asking for permission only to have your proposal turned down is just an awkward day for everyone. Similarly, if your girlfriend is nowhere near ready for marriage, her dad might alert her and she could dump you before you can get down on one knee.

If she is on board, speak with her about approaching her father. Perhaps she has tips on how to make the conversation go smoothly. Or, depending on her relationship with her dad, she might not want to you ask him at all, but her stepfather, or mother instead.

Be prepared
Arrange a time to meet her father alone. Depending on your relationship with him, you may want to invite him out for a round of golf or maybe for a couple beers at a pub. If you are not as close, a face-to-face talk at his home is a good choice.

Don’t show up empty handed. If he likes wine or cigars, bring some. The point is to bring a little something to soften him up before you pop the question.

Before you meet your potential father-in-law, go over what you plan on saying. Flattery will get you far. Complimenting his daughter reflects favourably on how she was raised, which is a compliment for dad as well. When popping the question to her father, steer clear of praising his daughter’s physical attributes and stick to how smart, kind and loving she is.

Go over the questions you think he might ask and have your answers prepared. How will you support her? Where will you live? Will you convert to her religion?

If you predict a negative response to your request, you may want to forget approaching him altogether. Asking a father for his blessing is no longer expected. It has nothing to do with getting permission to “take possession of his daughter,” it’s more of a respectful gesture. If you feel that speaking with him is mandatory, go to him with your intentions, but do not phrase it as a request. It is respectful to keep him in the loop.

The alternate route is to ask mum first. If you can get her on your side, she may be able to help convince dad to offer his blessing.

Confidence is key
When popping the question to her father, make sure to stand tall, maintain eye contact and speak up. Now isn’t the time to show weakness; now’s the time to show confidence. Mumbling through an uncomfortable “Um… I uhh… like your daughter uh, a lot” won’t get you anywhere.

Don’t wear grungy clothes or show up after a workout at the gym. Shower, shave and dress appropriately. Don’t wear a hat, or, if you do, remove it before you have your conversation. Present yourself as a mature, responsible adult, not the young kid that kept his daughter out past curfew.

Raise the subject
Begin by expressing how you feel about his daughter. Remind him that you are thankful that he raised such a beautiful and intelligent woman. At this point, he will know what you’re after, so go for it.

Respectfully ask for his blessing to marry his little girl. This can go several ways.

The best result is a hearty “yes.” At this point, a firm handshake is a good response. A hug may also do, but don’t kiss him. Also, do not jump up and down as though you were Martin O’Neill on the touchline.

With some fathers, it may take a long discussion. He may have issues regarding your maturity, age, cultural differences, or commitment level. Whatever his issues, hear them out and address each one as best you can. With a little convincing and explanation, you may change his mind.

If he does not give his blessing, gracefully accept his response, especially if you decide to proceed with the proposal. Do not argue or fight with him, because there is still a good chance you are speaking to your future father-in-law.

Father of the bride
When it comes to asking dad, it is usually a given that he will say yes. It doesn’t hurt, however, to approach the situation in a serious, respectful manner. He needs to know he is handing over his little girl to someone worthy.