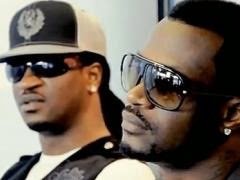 Nearly one week after Jude Okoye, elder brother to singing duo Paul and Peter Okoye (P-Square) posted on twitter that he was ‘done’, the stand-off in the Okoye family is far from abating with insiders telling Vanguard that Peter had refused to be appeased despite interventions from close friends.
Peter reportedly gave condition for peace, saying his wife, Lola, must be accepted and respected by the family or risk total isolation from him.
Several sources contacted by Vanguard confirmed that this was his only condition for peace.
One insider said: “Peter is tired of the long years he has had to plead with his family to accept the woman he has decided to spend the rest of his life with.
“He wants Lola to be welcomed in the family just as Anita (Paul’s wife) has been accepted irrespective of her tribe or age. This is his condition.”
Although the twins had fought at their dance rehearsal earlier in the month, Vanguard learnt this was not what had ultimately prompted Peter to severe his relationship with P-Square.
The source said Peter “has taken their attitude towards Lola even more to heart than what role he plays in P-Square, be it singing or dancing.
“He can no longer endure the ill-affection concerning his wife.”
Sources further said that the crisis had escalated after it was learnt that Peter had allegedly bought a house for Lola in the United States of America, USA.
Paul dilemma
Vanguard learnt that Peter’s twin, Paul is currently confused as he does not know who to support. Vanguard gathered that the twins had returned to talking terms, but that Paul is yet to show full support for Peter’s cause.
The source said: “The twins adore their mother and before she passed on, she had made it clear she was not in support of Peter and Lola’s union.
“Maybe that is why it is difficult for Paul. He does not want to be seen as being completely against the wish of their mother.”
Vanguard leant that he is the one making the most effort to bring an end to the crisis by appealing to Peter and the rest of the family.
Jude Okoye
Their elder brother, Jude Engees Okoye, has also refused to be placated.
According to the source, “there have been accusations and counter-accusations between Jude and Lola, each alleging that the other is rude and disrespectful.
“Jude holds on to this as his reason for not accepting Lola. But this is not the only reason.”
Peacemakers, who are industry friends and close business associates have however intensified efforts in resolving the crisis.
Hope
Also their social media pages show that they still identify with their pop brand name.
At press time, on Peter’s twitter wall, the pop star still goes with the handle @PeterPSquare, CEO P-Classic; Konvict Muzik/Square Records/Universal Music Group.
Paul Okoye also goes by his famous handle, @rudeboypsquare.
Jude Okoye, despite his “it over! I’m done!” tweet, his handle still goes by @judeengess, President/CEO Square Records, Northside Music Inc and Northside Entertainment Ltd. PSquare’s Manager/Producer/Director.
Sources, however, warn that the brand is still in dangerous territory, saying “anything can still happen tomorrow. You could wake up to hear the group has officially disintegrated or reconciled. We can only watch, wait and pray.”