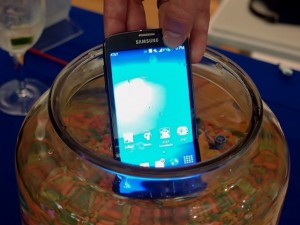 Launched 11 months after the Galaxy S4, Samsung’s resolve to ‘own’ the mobile phone market worldwide is evident in the innovative features introduced in the S5.

Samsung had overtaken rivals Apple on the second quarter of 2013 with operating profit for its handset division reported to be $5.2, while estimated iPhone operating profit was $4.6 billion. It has been a close battle between the two phone giants ever since, but Samsung continued to hold its own in Africa, with $187.8 billion made in Nigeria alone in 2013.

However, more Africans are beginning to embrace Apple’s iPhone as the popular Blackberry Messsenger made its way onto the Android and iOS operating systems last year, putting on a somewhat level playing field in African markets.

The new S5 features a 16MP camera armed with fast auto and selective focus, with the ability to combine 4G with WiFi for ultrafast downloads, ultra power saving mode, a built-in heart rate sensor, a fingerprint scanner which acts as identity verification for online shopping payments and an amazing resistance to sweat, rain, liquids, sand and dust.

The new phone from the South Korean mobile giants is expected to help the South Korean phone maker’s cause, as it plans to increase its mobile phone sales in Africa to 20 million in 2014, after shipping about 50 percent of the phones Africa used in 2013.

Africa’s economic growth has brought about a growing middle class that can afford high-end phones and also a growing population of tech savvy youths, increasing the sales of smart phones on the continent.

Over 30 percent of all smartphones sold in the world last year were from Samsung, who beat almost doubled Apple’s share of the market.

Despite the massive sales in 2013, the company realized a decline in its operating profit for the second year in a row as it recorded an estimate of $7.96 billion.

To ensure the new phone meets revenue expectation, Samsung priced the S5 lower at its commercial launch than the S4 model launched last year. Already, the new phone has started selling fast across Africa. Nigerian e-commerce outfit, Konga has as at 11:44 GMT sold 40 percent of its stock of the S5.

The new Galaxy S5 is sure to increase Samsung’s market share in Africa, but whether it can hold its own when Apple’s iPhone 6 launches later in the year remains to be seen.