A man who claimed to be an intermediary of the dreaded Boko Haram sect has alleged that two of thegirls who were abducted from Government Secondary School, Chibok, Borno State in a night raid by the insurgents have died from snakebite. 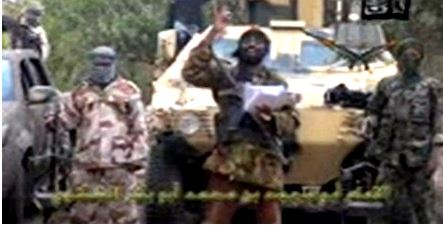 20 of the abducted girls are also said to be critically ill.

The said intermediary also claimed that those who were Christians among the missing girls had been forced to convert to Islam.

This is coming not long after the leader of the sect, Abubakar Shekau released a video claiming responsibility for the abduction of the girls,adding that it was Allah who sent him to do so.

He however did not reveal the number of girls nor where they were being held hostage.

Meanwhile in a televised media chat held in Abuja on Sunday, President Goodluck Jonathan said the authorities didn’t know the location of the school girls, adding that the Federal government was not negotiating with the insurgents to secure the release of the abducted schoolgirls as they cannot negotiate with faceless people.

Describing the situation as a trying and painful time for the nation, he pleaded for the cooperation of parents, guardians and local communities in the rescue efforts, promising to get the girls out from wherever they are being held hostage.

Christian Association of Nigeria (CAN) had over the weekend published the list of 178 abducted students, out of them 163 Christian girls and only 15 Muslim girls.

Following the girls abduction and failure to secure their release, there has been protests all over the nation and outside the country with people calling for the release of the girls.