Two policemen attached to the Special Anti-Robbery Squad, Lagos, have been reported dead on Sunday, while they were coming from Kaduna. 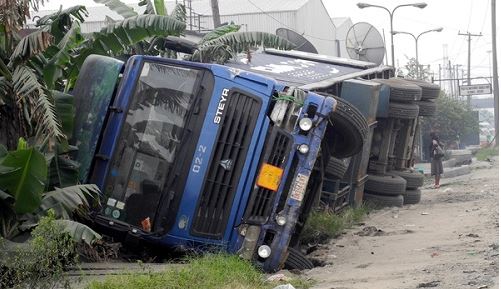 According to PUNCH Metro, the policemen lost their lives in an auto crash while they were conveying some suspects to Lagos from Kaduna.

It was learnt that three other people were wounded as a result of the accident and were in critical conditions in a hospital.

According to a police source, the tragic accident happened around Onigare Village along the Lagos-Ibadan Expressway after one of the front tyres of the vehicle burst while on speed.

The vehicle was said to have somersaulted, killing two of the policemen, while two other policemen and some suspects sustained injuries.

“On May 11, around 2.30pm, men from SARS team while on investigation from Kaduna had an accident at Onigare Village along Lagos-Ibadan Expressway. The front tyre of the vehicle burst and made the car to somersault.