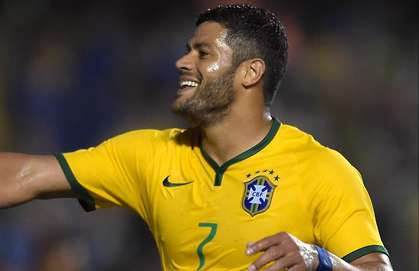 Arsenal have been priced as favourites to sign Brazil international Hulk before the summer transfer window slams shut on September 2.

The Gunners are believed to be ahead of AS Monaco, Paris Saint-Germain and Chelsea in the race for the 27-year-old, while the likes of Barcelona, Manchester United and Manchester City are rated as outsiders to secure the powerful striker’s signature.

Hulk currently plies his trade with Zenit Saint Petersburg, having spent the past two seasons with the Russian Premier League outfit after arriving from FC Porto, where he won a host of major honours including the Europa League under Andre Villas- Boas.

According to SkyBet’s current market, Arsenal are currently the 4/1 favourites to sign Hulk, with AS Monaco just behind at 5/1. Chelsea, who have been linked with the Brazilian on numerous occasions over the past few years, are currently at 8/1.

A move to Barcelona is currently priced at 12/1, while anyone expecting shock transfer to Manchester United can get up to 16/1. The odds are even longer
on a move to Manchester City, which is priced at a rather generous 20/1.

Few players in world football divide opinion quite like Hulk. The much-maligned forward is often criticised
for his alleged tendency to go missing in the big matches – much like Zlatan Ibrahimovic used to be – but he clearly possesses a wide range of useful
attributes, hence why he is currently on international duty with World Cup hosts Brazil.

In his most prolific season, with Porto under Villas- Boas, Hulk scored a remarkable 36 goals and provided 21 assists in 53 appearances. For Zenit last
season, he netted 21 goals and set up 13 more in 34 games – statistics which suggest he would be effective in the Premier League if snapped up by one
of the big clubs this summer.{Gms}