UK-based Islamic hate preacher was being investigated by the police starting from May 29, 2014, for sharing a video in which he praised Boko Haram terrorists for abduction of over 200 girls form GGSS Chibok in Borno State. 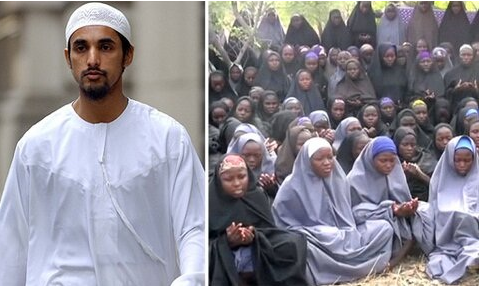 In his video message, the 31-year-old resident of London, Mizanur Rahman, claimed that violence against infidels (non-Muslims) was ‘not necessarily a bad thing’.

“People want to make it out as though history began on the day these girls were taken from – sorry I should say these women – were taken from this high school in Nigeria.

“They [Boko Haram] didn’t do to these girls what the Nigerian government had been doing to the Muslims all these years. They didn’t rape anybody. They didn’t torture. They didn’t murder any of these girls,” Daily Mail UK quoted the preacher as saying in the video.

It was not the first time Rahman expressed support to Boko Haram sect. In one of his previous interviews to the London Evening Standard he declared:

“On the one hand people are portraying them [Boko Haram] as crazed lunatics who don’t know anything about Islam or society in general.

“But on the other hand if you actually read their messages they are not trying to destroy society, they are just complaining about the oppression against them and trying to better society.”

The preacher, who attracted the attention of the police, used to be a follower of another suspected religious bigot, Anjem Choudary.

Choudary, who was also the co-founder of the outlawed Al Muhajiroun organisation with exiled Omar Bakri Muhammad, said that Rahman was his good-old friend and he should not be prosecuted for such a statement, which may be considered as “very measured”.

Choudary added that Rahman said nothing illegal about the sect and the female students, pointed out that based on Boko Haram video, they were being looked after very well. Despite admitting that targeting girls and women during war is inappropriate, he referred to current “extraordinary” situation in Nigeria, which may justify the act of Boko Haram fighters.

It would be recalled that Boko Haram-linked violence has claimed an estimated 10,000 lives between 2002 and 2013. The group, which specialises in bombings, assassinations and abductions, is especially active in the three North Eastern States of Adamawa, Borno and Yobe.

The UN security council imposed sanctions on the group on May 22, 2014.