Man kills wife in Lagos for allegedly infecting him with HIV 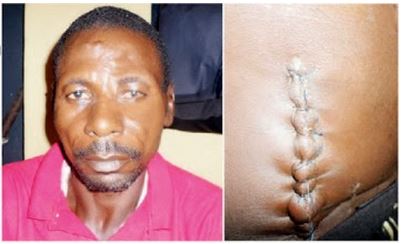 Philip Katongu (pictured above) from Wamba, Nasarawa State has been arrested for allegedly stabbing his wife to death, Punch reports.
According to reports, Katongu stabbed his wife to death in a street at Oniru Estate, Maroko, Lagos, where they lived. Police say she was stabbed at least three times. After he was arrested by operatives of the Department of Criminal Investigations, Yaba, Lagos, Katongu, 45, claimed he killed her because she infected him with HIV and then wanted to leave him for another man. He explained:

“I married Justina, my second wife in December 2010. I later learnt that she had given birth to two girls for a man. The girls died of AIDS. However, when we first met, she did not tell me all these. I explained to her that I have a wife with children and I wanted to marry her too. Before marriage, I told her we should go to hospital to conduct HIV test, but she refused and said that she was HIV negative. So we started sleeping together.”

Katongu claimed that without his knowledge, his wife had been going to Abuja for medical treatment every three months for HIV, until March 2013 when she took him along.

He said it was at the hospital that she disclosed her HIV status to him.

“I was angry and told the doctor who equally blamed her for not disclosing it to me. The doctor then tested me, and I was positive. We came back to Lagos and continued with the relationship because I loved her. But suddenly, she told me she wanted to pack out from my house that she was no longer interested in marrying me having had another person in Abuja. In fact, the man usually called her on phone while we were together.

“I told her that with her status, she should not go and be infecting people with the virus. And that I will kill her and kill myself. We started fighting and I stabbed her. It was in the early hours. I stabbed her three times with a knife. She shouted and people were knocking at our door.

After she died, I stabbed myself, and the people broke the door open. I woke up to find myself in a hospital. I feel very bad that I killed my wife. I loved her very much.”

Share
Facebook
Twitter
WhatsApp
Previous articleCorpse of man who allegedly killed his wife after she gave birth to twins, found
Next articleNigerian man quarantined in Hong Kong over Ebola
- Advertisement -