Having earlier distanced himself from the initial endorsement of President Goodluck Jonathan for re-election by the North-West Zone of the Peoples Democratic Party (PDP), Jigawa State Governor Sule Lamido might have changed his mind.

Lamido’s poster for 2015 presidential election, with Rivers State Governor Rotimi Amaechi as hos running mate have emerged at several times during the last two years, but the governor now wants to support his president, provided some conditions are met. 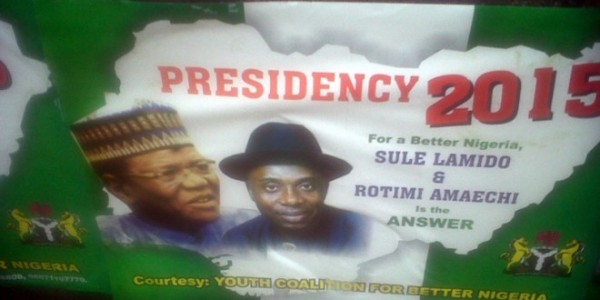 According to Vanguard, Lamido changed his mind after Niger State Governor, Babangida Aliyu reportedly told the Jigawa governor that Jonathan had accepted to abide by all the commitments that he made to Jigawa people during his electioneering campaign in the state in 2011.

Top on the list of the commitment extracted from Jonathan for Lamido is that the Presidency will refund the sum of over N15 billion expended by Lamido to build the Dutse International Airport, a project which the Federal Government promised to undertake but failed.

The Presidency also agreed to undertake the immediate construction of the Auyo Irrigation Project, which was started by the Shagari Administration but abandoned and has remained an electioneering topic by successive presidential candidates and parties.

It was also learnt that the Federal Government agreed to construct a major road in the state to connect the state-owned university at Kafin Hausa, as a means of appeasing the governor and his people.

A top source in Jigawa told Vanguard that Lamido accepted to support Jonathan’s candidature at the PDP NEC meeting in Abuja on Thursday because according to him “there has been a commitment” by President Jonathan to fulfill his campaign promises to the people of the state.

“All along, Governor Lamido had insisted that he would only support the president if he fulfilled his campaign promises to the state and not that he wanted to replace him as some persons were insinuating, a top official said.

But the Director of Press to Governor Lamido, Mr. Umar Kyari, who spoke on the phone from Saudi Arabia, pointed out that the governor had never had any disagreement with Jonathan on the issue of running for the same office.

“As a matter of fact, the governor has never declared his intention to challenge Jonathan in the Presidential race but it was only his admirers, who suggested that based on the brilliant performance he has put up in the state, he could replicate same if he becomes the president of Nigeria,” Umar explained.

“It must be made abundantly clear that governor Lamido has never told anyone that he was going to challenge Jonathan in the presidential election in 2015,” the spokesman stressed.