Reports just coming in from Abuja, indicate that the stage is set for a crucial meeting of all groups campaigning for re-election of President Goodluck Jonathan in 2015, the leadership of Peoples Democratic Party, PDP, and top officials of the presidency scheduled to hold at the Federal Capital Territory, FCT, on Tuesday, 16 September, 2014. 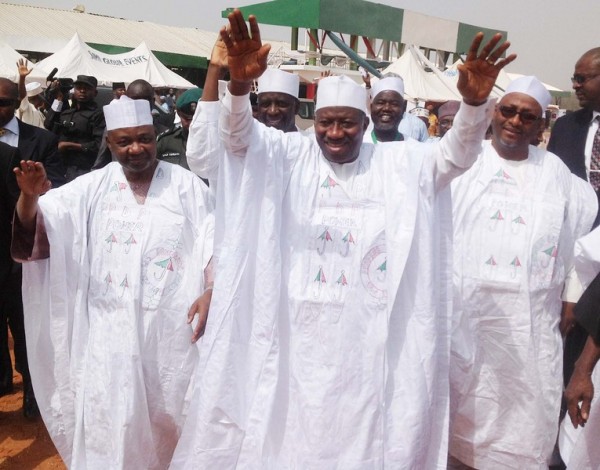 According to the P.M NEWS report, the event tagged ‘National Summit for Goodluck Support Groups’, which is being coordinated by Professor Ahmed Rufai Alkali, special adviser to the President on Political Affairs, is said to be a dress rehearsal to formal declaration of President Jonathan for 2015 presidential race expected to take place in few weeks time.

Speaking with newsmen last week, Akali stated that the event is a rare opportunity to experience an outpour of love by Nigerians from all walks of life for President Jonathan.

“This National Summit, which is a celebration of the core values that bind all Nigerians as one people, united for peace, stability and progress of our dear country shall take place on Tuesday, September 16, at the Eagles Square, Abuja from 10.00am,” he said.

It was gathered that no fewer than 10 members from each of the 8,000 pro-Jonathan groups are billed to attend the ceremony scheduled to hold at the popular Eagle Square.

Also expected at the event are Secretary to the Government of the Federation, Anyim Pius Anyim; Senate Majority Leader, Victor Ndoma-Egba, former PDP acting national chairman, Bello Haliru Mohammed and PDP members in the two chambers of the National Assembly.

Another source stated that members of PDP National Executive Committee, Board of Trustees members, PDP governors and members of the Federal Executive Council are expected to use the occasion to call on Jonathan to declare his 2015 ambition while also listing his various achievements to convince Nigerians why the President should be given another term of office.

While Governor Akpabio is scheduled to deliver a keynote address at the event.

Chief Ahmadu Ali, former national chairman of PDP is expected to chair the event, while Alhaji Adamu Mu’azu, the incumbent Chairman of the party is the Special Guest of Honour.

It would be recalled that President Jonathan had earlier been threatened by the South-South Chiefs and Elders Council, SSCEC International, on September 7, 2014, that they would arrest him (President) if he fails to contest in 2015 presidential election.