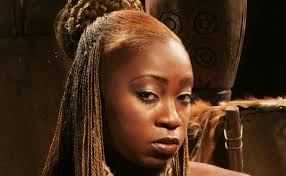 Nigeria’s foremost Drummer, Ara whose marriage packed up few years ago leaving her with a 6-year old son, has said, she is ready to give marriage another shot. Ara revealed that, she isn’t just ready to get married for the sake of being married, but she really wants to get married for love. She went as far as saying, if a younger man comes around, she will jump at it and as a matter of fact she has been talking to people about that, and they feel if theyounger man is matured at heart, then she should go for him. Here is what she told Punch;

“When I meet the right person and fall in love, I will consider marriage. I really want to fall in love again. I don’t believe in marriage just for its sake. If a younger guy comes up to me, I don’t mind dating the person. I don’t mind marrying somebody who I am older than. I have spoken to a couple of people and they don’t see anything wrong with it. If the person has a mature mind and is committed, then it is not a big deal.” Continue below…

When asked if she is not looking for somebody who she can control and manipulate, the singer said she is not the overbearing type and she never exhibited such trait in her former marriage.

“I am not that kind of person. I am the most submissive wife. I am ‘mumu’ for love. You can ask my ex, he can tell you. There was never a day I didn’t ask him what I should cook even though I was the breadwinner. I would always ask him what he wanted. And whatever he said, if we didn’t have it, I would jump on an okada and enter the market to go and buy the stuff. I am a hopeless lover,” she said