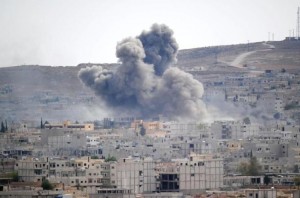 Kurdish forces have reportedly thwarted a new attempt by ISIL fighters to cut off the Syrian town of Kobane from the border with Turkey before Iraqi Kurdish reinforcements arrive.

Sunday’s pre-dawn assault marked the fourth straight day ISIL had attacked the Syrian side of the border crossing as the Iraqi Kurdish Peshmerga fighters prepared to head for Kobane, the Syrian Observatory for Human Rights said.

Kurdish forces, backed by US-led air strikes, have been holding out for weeks against an ISIL offensive around Kobane, which has become a high-profile symbol of efforts to stop the fighters’ advance.

The US military said in its latest update that American warplanes carried out five air strikes near Kobane on Saturday and Sunday, destroying seven ISIL vehicles and an IS-held building.

Ground fighting for Kobane has killed more than 800 people since the ISIL offensive began on September 16, with ISIL losing 481 fighters and the Kurds 313, said the UK-based Syrian Observatory, which relies on a network of  sources inside Syria for its information.

Among the dead are 21 civilians, but the figures exclude ISIL losses to US-led air strikes, which the Pentagon has said run to “several hundred”.

The assault prompted nearly all of the enclave’s population to flee, with an estimated 200,000 refugees streaming over the border into neighboring Turkey.

Last week, under heavy US pressure, Turkey unexpectedly announced it would allow the Peshmerga fighters to cross its territory to join the fight for Kobane.

The main Syrian Kurdish fighting force in the town has close links with the outlawed Kurdistan Workers Party (PKK), which has fought a three-decade insurgency in southeastern Turkey. Turkey had previously resisted calls to allow in reinforcements.

The Peshmerga forces are “ready to go”, but they are not expected to deploy to Kobane before Monday at the earliest, Kurdish news agency Rudaw reported.